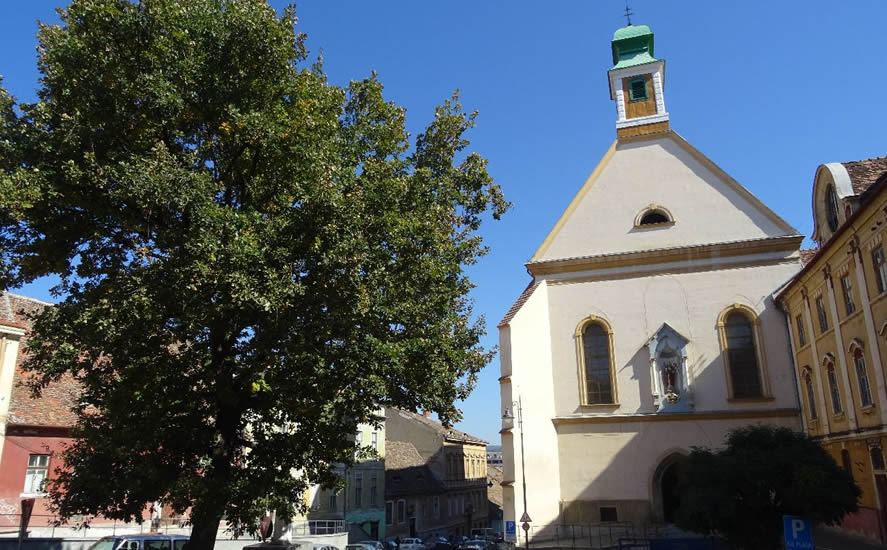 The Ursuline Complex is composed of the Greek-Catholic Church and the former Ursuline Monastery.
The Dominican monastery was erected in this location in 1479 but in 1543, after the Reform when the German population turned to Lutheranism, the monastery ceased its activity and the church entered in the possession of the Lutherans. During the Austro-Hungarian period the church, known under the name of "Kloster Kirche", was taken over by the roman-catholic cult being entrusted to the Ursuline nuns with the purpose of building a girls' dormitory.
In 1733 the Ursuline nuns entered in the possession of the monastery and started building a girls' school.
The interior of the church was initially built in a Gothic style but by means of the financial contribution of Empress Marie Theresa it was renovated in a Baroque style. The statues of the saints worshiped by the nuns were places on the props built in the interior. The inscription above the triumph arch reminding of the benefactor of the church, Empress Marie Theresa, is a special element of the ensemble.
The letters of the text written in Latin are marked with a red color and indicate the year of the last renovation - 1774.
The exterior of the church preserves numerous Gothic elements, among which the main portal, the windows and the counterforts.
Starting with 1992, the Roman-Catholics hold their religious services along with the followers of the Romanian Church united to Rome, the Greek-Catholic Church.