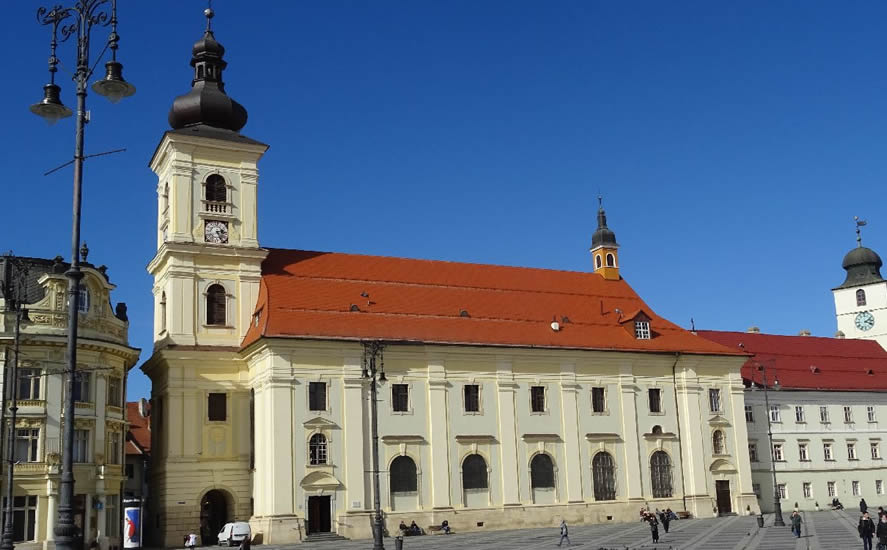 The “Sf. Treime (Holy Trinity)” Roman-Catholic Church represents one of the most important buildings in the Large Square dating from the 18th century. After Sibiu’s adherence to the Reform, the city was left without Catholic churches for a period of over a century, all the churches serving the Evangelic cult.
At the end of the 17th century, following the annexation of Transylvania to the Austro-Hungarian Empire and the issuing of the Leopoldine Diploma, a small Catholic community was formed in Sibiu, which, with the help of the Jesuit monks, built the new church in the spirit of the early Viennese Baroque. Georg von Sorger, the Transylvanian Bishop sanctified the church on September13th, 1733.
The tower which is detached from the nave was finished in 1738 and at the level of the street it presents an arched passage way which allows the access towards the Small Square. The tower clock with dials facing the two squares, dates from 1838.
The exterior of the monument is austere, seven smaller rectangular windows with stone cadres being superposed on the seven windows situated at the first floor. In the interior, the lateral altars are divided by Dorian doubled columns. The statue of the saint martyr Nepomuk which was initially placed in the Large Square must also be mentioned here. During the communist regime, this statue was dismantled and at the present it is located in the interior courtyard of the parochial house in the immediate vicinity of the church.
Among the valuable elements from the interior we mention the following: the fresco representing “Mary and the baby”, the most important Baroque accomplishment in Sibiu; the headstone of count general Otto Ferdinand Traunn of Abensberg (1677-1747), the military commander of Transylvania. Allegoric representations of Victory, Faith, Hope and Mercy appear here and the stained glass windows produced in Budapest in 1901 are presented on both sides.
The members of the parochial community represent three ethnic groups. Therefore, the divine service is conducted in three languages.