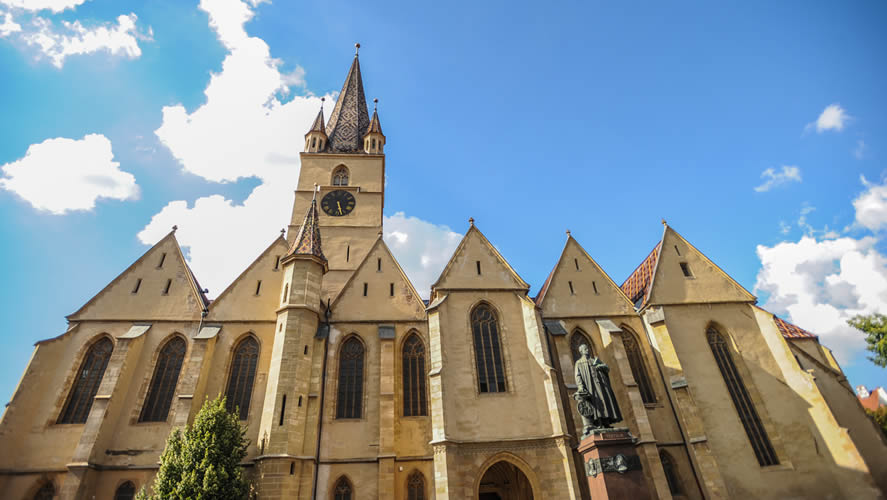 ”Saint Mary” Evangelical Parish Church is one of the most impressive buildings in Sibiu. It was raised in the 14th century on the location of an old Roman church dating from the 12th century. The building is dominated by the seven level tower with the four towers on the corners, a mark showing that the city had the right of condemnation. With a height of 73.34 meters, the tower is the tallest in Transylvania.

The cathedral’s tower is situated at the balcony on the southern wing and includes a Baroque style organ made by a Slovak craftsman in 1671 which replaced the first organ brought in Sibiu in 1585. The new organ was built by the Wilhelm Sauer Company (Frankfurt/Oder) and installed in this church in Sibiu in 1915. At the present there exist two other organs made by this company (in Berlin – Tempelhof and in Talin - Dom). In 1997 the organ undergoes complex renovation works, nowadays being the largest in the South-Eastern Europe.

The mobile inventory of the Evangelic Church in Sibiu, one of the most impressive gothic halidoms in Romania, is particularly valuable. Even though a series of cult pots, made in gilded silver by famous craftsmen in Sibiu such as Sebastian Hann, are not accessible to the public, other valuable pieces can be admired by the visitors inside the church. In the choir, in the church axis, one can find one of the most beautiful bronze fonts existing in our country. It has the shape of a calyx with a sole, foot, knot and basin, being decorated with a series of gothic inscriptions. Also, 228 booklets in relief adorn its surface, most of them being figurative representations of Byzantine influence. The font dates back from 1438 being the work of master Leonhardus. It is supposed that it was cast in the bronze resulting from the Turkish cannons captured by the inhabitants of Sibiu in 1437.

Starting with 1496, for a period of 300 years, the Church served as a burial place for mayors, county administrative leaders or other personalities in Sibiu. In 1796 burials in the church are prohibited, but an exception was made in 1803, when baron Samuel von Brukenthal’s body will be laid for eternal sleep in the vault built near the pulpit. The tombstones that covered the graves were dismantled from the church nave in 1853 and incorporated in the walls of the church ferula, thus obtaining a gallery of 67 tombstones, unique in Romania.

The Church is opened to visitors between 10 a.m. and 6 p.m. during the summer and between 11 a.m. and 4 p.m. the rest of the year. The Church Tower may be visited on demand. During summer, organ concerts take place here every Wednesday night.