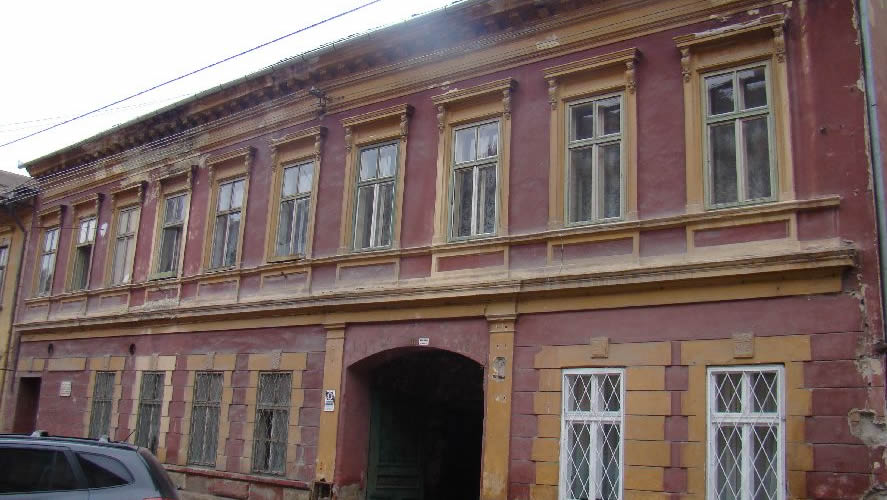 Basement, ground floor and upper floor building.The eclectic facade is structured on ten axes upstairs. Wide eaves, paneled soffit, ridged roof. The access to the courtyard is made through a semicilindrical vaulted corridor. There is kept in the attic a level pinion that proves the existence here, in the 14th century, of a house with the long side to the street.

The upstairs windows display a window ledge, a rampant decorated with boxes, cornices supported on consoles, acanthus leaf volutes and human masks;
A commemorative plaque unveiled in 1968 states: "In this house stopped in the middle of the 1848 events, on his way to Apuseni Mountains, Avram Iancu (1824-1872),member of the Romanian National Committee".

During August 1850 –January 1851 here was hidden Ion C. Brătianu being a refugee as a revolutionary.

Curtea Mediasului Hotel
It was the meeting place of the Romanian intellectuals, and during the 1848 Revolution, of the Romanian revolutionaries. On August 18th 1848 Simion Barnutiu who was at that time in the restaurant, ran through the window not to be cought by the Magyar police.
After 1875 the hotel was bought by Josef Meltzer who renovates it, giving it the current shape and changes its name to Meltzer House.
In January 1934 the hotel is bought by I. Gherasim who changes it into Metropol Hotel-restaurant which became since 1939 Union hotel-restaurant until 1948 when it is closed.