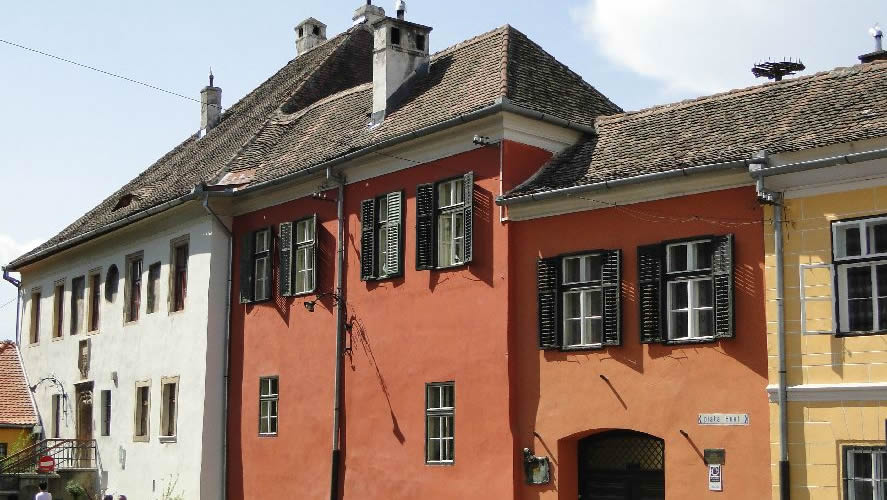 The building consists of 4 bodies that close a narrow courtyard. The body on the west is the oldest, probably dating from the early fourteen century. The body has two floors on the slope toward the city, used as living rooms. The hipped roof with a ridge parallel to the facade replaced after 1808 a much higher roof, with tiles. In the basement it is stored a stone ogival framing.

- The traditional joinery from the floor windows (1800);

- The entrance door with rich stone framing dates from the fifteenth century (Gothic style) and the stone arms above the portal dates from 1502. Attributed to famous stonemason and architect ANDREAS LAPICIDA, the portal was ordered by JOHANNES, the plebeian from Altana, having on the upper side a rectangular panel with its coat of arms (a ramping lion holding a cross emerging from a crown) and on its 4 corners it had four portraits - the plebeian's, his Patron St. John the Baptist, Emperor FREDERICK and Pope ALEXANDER VI BORGIA.
The inscription on the top, ARMA JOHANNIS DE OLCZNA Q(VE) CESAR/ FRIEDERICUS DEDIT ADDIDIT CRUCEM/ HIERUSOLIMA SANCTA ALMA ROMA/ FIRMAVIT ANNO DOMINI 1502, is framed by a profiling announcing the Renaissance. The door's Gothic framing is distinguished by the depth of the moldings and the delicacy of the vegetable decoration.

- Murals in the main front pockets uncovered after restoration in 2007

The Evangelical parsonage. At the ground floor of the body toward the Liars' Bridge there was a commercial space dating since mid nineteenth century.