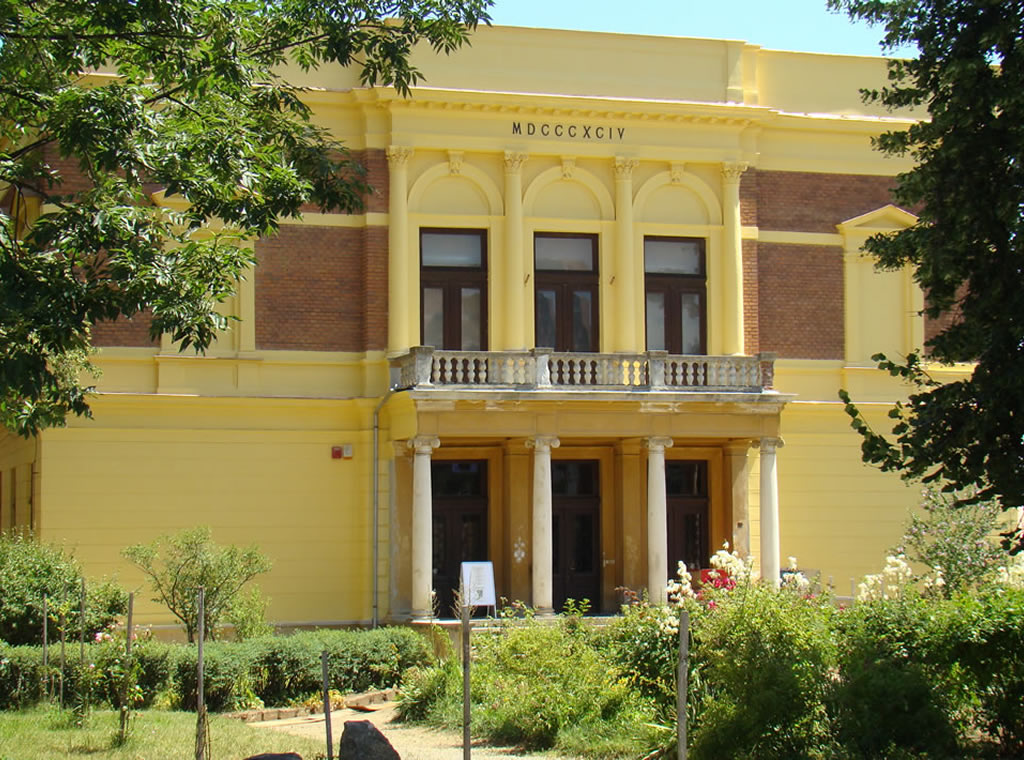 The Museum of Natural History
1894

The building composed of basement, ground floor and 1st floor is placed between the premises of the III and IV enclosures of the fortifications. It was built for sheltering the headquarters of Transylvanian Society of Natural History and a museum. The main façade presents a Neo-Classical appearance and as special features a portico with four ionic columns above which there is a handrail balcony. The three axes of the upper floor are separated by four Corinthian columns that support an entablement having the frieze inscribed with MDCCCXCIV (1894). Access to the interior is through the door in the center of the vestibule.
Inside, a festive hall with a large stairway facilitates the access to the more spacious rooms upstairs.
The Court has on one of the sides the city wall and is a place of relaxation for visitors to the Museum but also a place of encountering some rare or protected species of plants. So, along with ornamental shrubs (Lonicera sp., Spiraea sp) and common trees (lime tree -Tilia cordata, maple - Acer platanoides, lilac - Syringa vulgaris, pine - Pinus sp.) there are present rare species protected by law such as: american maple (Acer negundo), Tinus coggygua, yew (Tisa baccata), larch (Larix decitua), Greek fir (Abies spp.).

- Facade with balcony and columns, windows framework consisting of pilasters and triangular gable.
-The ceiling of the hall is decorated with hand-painted boxes presenting zoomorphic elements while at the base of the ceiling there are mentioned the names of the founders of the Museum, who through their personal research in the field of natural sciences or their donations to the Museum become landmarks of national and international science (1894)
- Stairs ironware (1894)

The building was built by architect C.W. Friedrich Maetz from Cluj and the festive inauguration took place on May 25, 1895.
It is the first building on the present territory of Romania built with the precise destination of hosting a museum.
The building was the headquarters of Transylvanian Society of Natural Sciences (Siebenbiürgischer Verein für Naturwissenschaften in Hermannstadt) and the headquarters