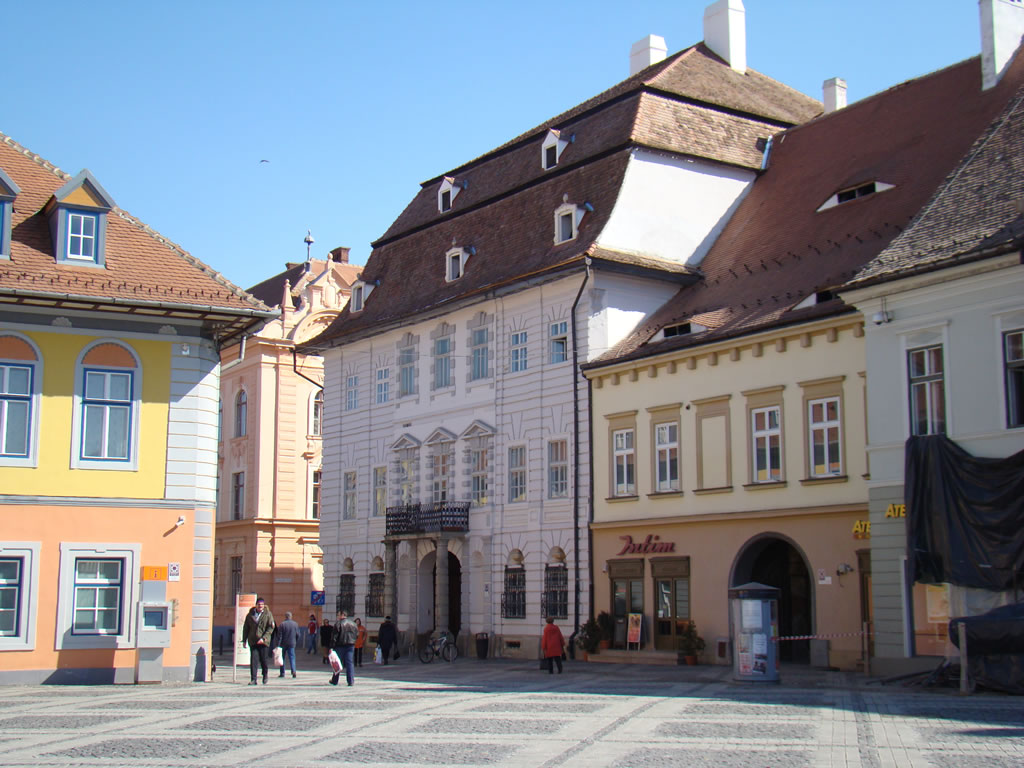 The building is composed of a basement, a ground floor and is two stories high. The façade rises over the two stories and is structured on seven lines.
The three-stepped gabled roof preserves only two skylights of the initial five. The intrados of the gutter is decorated with rectangular frames and wooden embossed rhomb-shaped vegetal motifs.

- The monumental entrance comprises a doorway which is framed by two columns built on high pedestals, displaying circular arch housings on each side, adorned with a sort of Baroque shell;
- The gate framework shaped as a semi-circular arch, displaying a human mask;
- The main façade was treated in the style of late Renaissance palaces, imitating the bossages characteristic to this style by means of deep horizontal streaks over the entire surface of the building.  The windows are covered with the iron grid from the ground floor surmounted by cavities in which decorative elements, which are characteristic to the Baroque. The main windows at the first floor have triangular pediments; the iron railing balcony is supported by columns.
- The loggia at the ground floor which looks onto the courtyard has semi-circular arcades and Dorian column galleries at the first and second floor;
- The massive gate is decorated with floral motifs and human masks, preserving the original ironware;
- The wrought iron railing staircase (1868)
- The ceiling of the large hall at the first floor is decorated with floral motifs plastering and preserves a 19th century heating stove

The present day building was erected by leather dresser Anton Filek on the location of an older building. In 1868 it entered in the possession of the Evangelic Church which transforms it in the offices of the Evangelic Consistory C.A.
The cellar was used as a bomb shelter during World War II.
On August 1st, 1945 it became the Cultural Palace of the Workers United Syndicates in Sibiu.

The old building:
Johannes Sachs von Harteneck and his wife Elisabeth lived here, the house having been previously in the possession of the Haupt family. His wife was unfaithful to him, having an affair with an Austrian officer. The adjutant of the officer was found dead in Harteneck’s house, Harteneck being made responsible for this murder. He will be decapitated and will lose all his fortune. The building was taken over by the State which will turn it into the Government Offices or the Province Offices. The Local Government used to meet here and the house also hosted the Royal Guberniya.