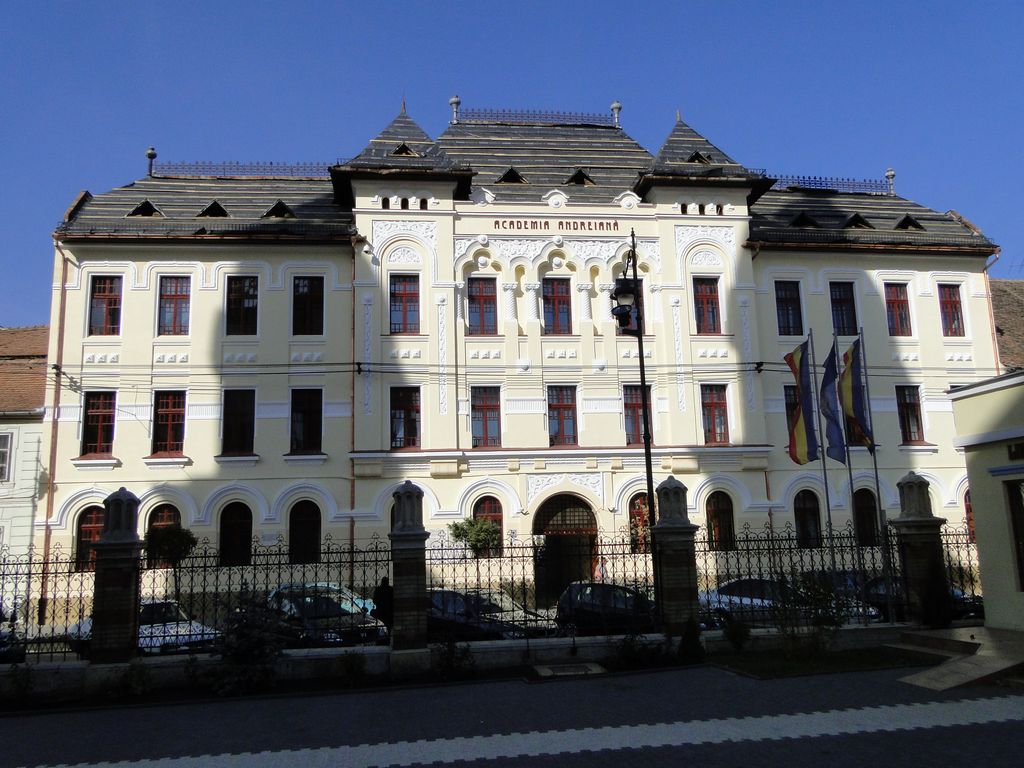 The building of the Andrei Saguna Theological Institute Cladirea Andrei Saguna built in 1914 in ‘neobrancovenesc’ style, a style which is rarely found in Sibiu.

- Facade in ‘neobrancovenesc’ style;
- An impressive gallery of over 60 portraits in the University’s Theatre. They are portraits of the teachers who taught here along the years and almost all of them have been painted by Doina Veturia Papp.  A commemorative plaqu placed among these portraits honors their creator.  Doina Veturia Papp lived during 1907-1991 and she was George Bariţiu’s great granddaughter.
- The bust of the metropolitan Nicolae Balan is placed in the yard

The Theological Institute functions in this buiIding since 1864 when Andrei Saguna bought from his own money a floor building. It was called the Andreian Seminary. Since 1922 it changes its name into the “Andreiana” Theological Academy, denomination kept until 1948;
A commemorative plaque mentions the fact that “In this building met on October 23rd – November 4th 1861 the representatives of the Transylvanian Romanians to form the Transylvanian Association for Romanian Literature and the Culture of the Romanian People (ASTRA)”,

Capela Facultatii
The college chapel was built in 1935 together with the back wing of the building. The chapel was sainted by metropolitan Balan on October 27th 1935.
Inside there is a shrine dating from the 18th century which was proclaimed a historical monument; it was brought from the Greek Church from Bungard.
The painting was executed in Byzantine style by the master A. Damian from Bucharest;
The old iconostasis is made of linden wood, gilded with gold burnt Ieaves. It was worked by the Greek craftsmen from the South of the Danube, around 15th -16th century.
It was given to the church from Bungard by Maria,  Serban Voda Cantacuzino’s wife, when she was a refugee in  Sibiu.
From Bungard this iconostasis was brought and placed in the chapel from Sibiu by the metropolitan Nicolae Balan, against the Bungard’s parishioners’ wish.
The iconostasis’ base was restored when it was brought to Sibiu in 1935.