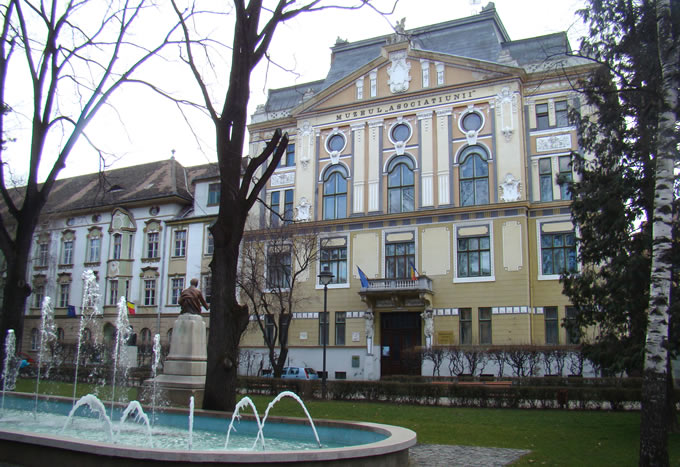 The ASTRA Palace was erected starting with 1903 according to the plans of architect Alador Baranyai, the materialization of this building being trusted to architect Gustav Maetz. The construction was finalized in December 1904, but it was inaugurated a year later, on August 19th.
The entrance in the building is made through the gate guarded by two atlases.
The ground floor hosts "The Public Library", "The Historical and Ethnographical Museum of Transylvania " is situated at the first floor, as well as "The ASTRA Conference and Disertation Hall ", the former being built by the "Society for a Romanian Theatrical Forum in Transylvania".
This is why the Astra Hall also had the role of the first stage for the Romanian Theatre in Transylvania. The Hall was inaugurated with the representation of the play signed by Vasile Alecsandri and entitled “Fântâna Blanduziei” (The Fountain of Blanduzia).

The Museum of the Association ceased its activity in May 1950.

- The entrance displays a marble plate unraveled in 1968, reading the year 1968: “This cultural edifice, built by ASTRA, hosted the first public national library, the Historical and Ethnographical Museumof Transylvania and the first Romanian theatre hall in Transylvania since 1905”
- Access in the building is made through the gate guarded by two telamons;
- The hall impresses through its Victorian atmosphere and its rich interior decorations;
- The gallery of busts belonging to Romanian cultural personalities is displayed in the main corridor;