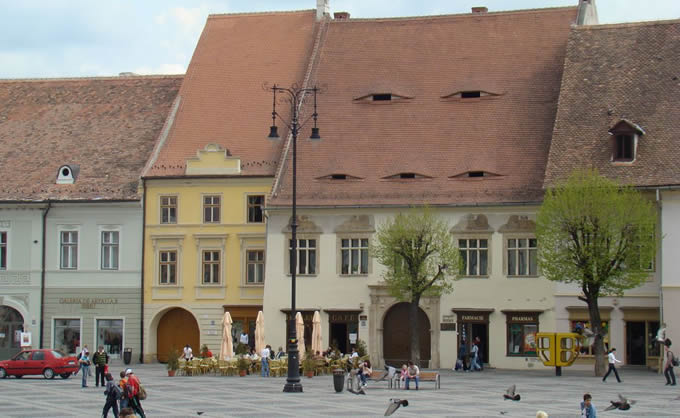 It is an L-shaped plan house, with the short side looking onto the square, presenting a basement, a ground floor and the first floor. The main façade is structured on five lines, the ground floor displaying a semi-circular arched door passageway, positioned at the center.
At the first floor, the building has Renaissance style rectangular windows. The two-ridged abrupt roof with a crest parallel to the façade has eye-shaped skylights, disposed on two levels. The semi-cylindrical and cross-shaped arches of the rooms situated at the ground floor may be noticed at the inside. Body B of this building is very valuable, being a two-stories gothic tower dwelling, with a two-ridged very abrupt roof, covered with tiles.

- The doorway has a semi-circular framework above. The mullions are each composed of a column displaying a Corinthian chapiter. The tympans of the arch are decorated with embossed trophies. The entablement displays a cornice supported by denticles, its ax presenting the coat of arms of Petrus Haller and the year 1537. A pediment exists on top, at the center of which there is a circular medallion with a portrait of a warrior seen from a profile.
- A stone framework on the left of the passageway
- The two stories high tower in the courtyard is of Gothic facture, with an abrupt roof, presenting three windows with stone frameworks and crossed baguettes at the second floor. Some sources indicate that is may have served as a chapel.
- An ogive door framework, accessing the cellar, situated to the left of the passageway door
- A door framework leading to the staircase of the first floor in the main body. The jambs are decorated with embossed Renaissance motifs and Haller’s emblem.
- The façade displays rock framework windows and mural paintings at the top, representing lions. These were discovered in 2006, during the rehabilitation works.

After 1470 the house was in the property of senator Hyeronimus Schneider, who probably built it. At that time the house was among the first five houses in the city with the higher local charges. Michael Gereb came to own it around1490. After 1500, the house belonged to mayor Johannes Agatha followed by merchant Szervatius Holzschuch until 1524 when he sells it to Michael Altemberger, who further sells it to Petrus Haller in 1537. It was Haller who carried out the works in the Renaissance period.
The house remained in the possession of the Haller family until 1882 when it was purchased by Wilhelm Nendwich who sells it to August Teutsch, after only two years. In September 1884, Teutsch moved his pharmacy here, from the building at no. 9.
After Teutsch died, the pharmacy “La Leu” (Zum Löwen) is purchased by Albert Zink, and the house enters in the property of the Saxon University.
After World War I the pharmacy belonged to Emil Wermescher until it was nationalized in 1949. It will continue to function as a pharmacy during the communist period as well, until 1989, when it was closed.
A fashion and manufacturing store functioned to the left of the passageway under various names and owners. At the end of the 19th century it hosted Fashion House G.A. Gross and at the beginning of the 20th century the fashion store of Karl Kremer functioned here. Then, in 1928, the Schuster & Breitenstein store opened here and after two years it was transformed in a store for socks and woolies (owned by Carl Breitenstein) until World War I when it was purchased by Gustav Iacobi. After nationalization, it remained a woolies store all through the communist period.