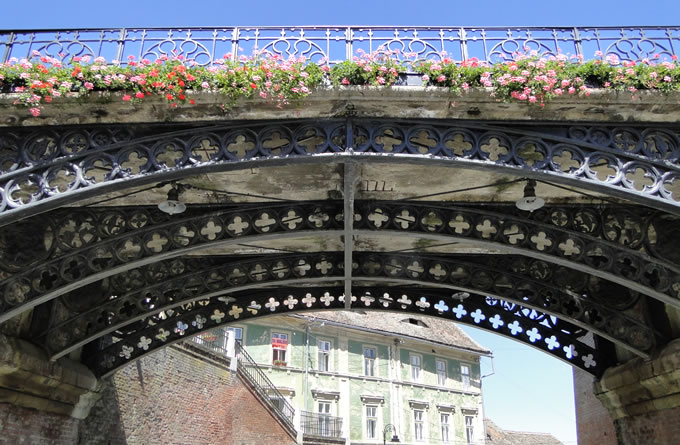 1859
The pedestrian bridge connecting the two parts of the Small square  allows the link between the Lower Town and the Upper Town.
The bridge is placed on a gate bridge belonging to the 2nd fortification wall. The initially vaulted passage used to be made through an conglomerate of buildings which had been demolished in 1851. ( the town’s scale, the selling market places belonging to the cobbler’s shoemakers’ , tailor’s, baker’s guilds, the Milks’ Bridge, the houses belonging to Rosenfeld baron where it used to be the law Academy, the Jikeli house with the chemist’s, the barber’s shop). In the same period the  staircases on the western  side of Ocnei Street were demolished.
The bridge is made up of four flattened archways made up of  forged iron, representing technical innovation summing up a remarkable equilibrium between the resistance structure and the decoration, made through jigsaw technique  which consists of a chain of qvadrilobs underlining the arch and the six  decreasing circular elements placed between the arch and the horizontal element under the walking level.
The circle with maximum diameter are decorated with Sibiu’s coat of arms on the southern side  and on the northern side it has the inscriptions “ 1859” , and “ Friedrichs  Hutte”.
The decreasing circles are decorated with  neo- Gothic vegetal  and geometrical design. The parallel archways support the two  stone  profiled consoles, fixed in the apparent brick  walls, with a sinuous way, widened towards the superior part with a parapet made up of squared metallic bars segmented by the massive pedestals  with a squared plan and flattened edges , remade of concrete  and having a double cornice among them. The four pedestals from the end of the bridge , more robust , are made up of stone and support  cast iron street lamps. The metallic parapet consists in 8 panels with circles having a  Gothic radial decoration. During the transformations   in 1851-1859, the two wooden staircases from the sides of the street were demolished, only the one on the northern part being reconstructed.
The wall supporting the staircase includes  a squared stone ancadrament, remain of a medieval building.