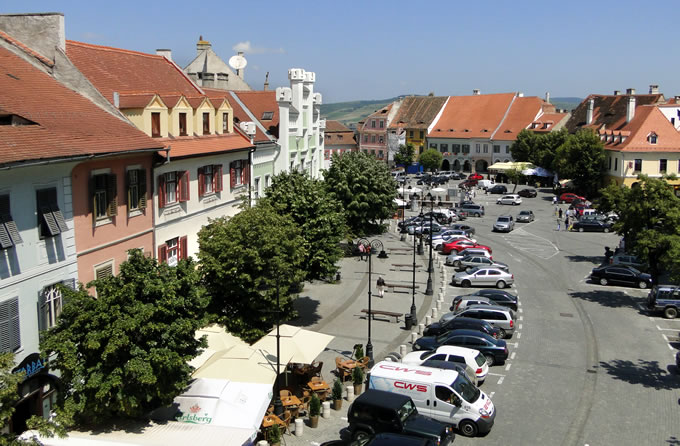 1370 The  butcher’s shops are mentioned in the documents
1466 The Cobler’s Guild is building a head office
1494 The Tailor’s Guild is building a new head office in the Small Square in the place of the future Jesuit Seminary
1494 The Cobler’s Guild is building a new head office over the Liar’s Bridge
1757 the Insane Cage is moved from the Large Square to the Small Square
1848 a house is demolished thus the street  connected  to the Huet Square is extended
1851 the church situated on the tunnel leading in the Ocnei Street is demolished together with the other houses
1853 The Currier’s Way is transformed into a voulted gangway  when an extension of the Rideli house was built. It makes the connection with the Avram Iancu Street.
1875 Linden Trees are planted around the square
1929  18  concrete stands are inaugurated
1930 the second tunnel of connection with the Large Square is accomplished under the house  nr. 1

The Small Square is called Circulus Parvus in the documents and lies on the surface of the second girdle of fortified walls of the town that started in a semicircle from the Priests Tower to the Liar’s Bridge where it joined the first fortified precincts.
The square is divided in two distinct parts from the Ocnei Street going down under the Liar’s Bridge to the downtown.
The northern  and estic parts follow the outlines of the second girdle of walls  having a circular shape. The buildings on the left part of the Ocnei Street have a concave shape and follow the outline of the first girdle of fortified walls , dividing the Small Square and the Huet Square.
The buildings in the Small Square ( with one exception ) do not share that massive  velted tunnel front  which is characteristic to the large Square and to the Balcescu Street.
The houses in the Small Square are characterized by the loggia from the ground level  which is vaulted and opened towards the square, with semicircular archways supported by portants. The buildings used to be handcraft workshops , places for merchandise exposure. Beginning with the XIXth century the archways started to be built.
In the south-eastern part the square received the actual appearance only in the XVIIIth century when, on the place of the Cobler’s Guild house the  Roman-Catholic church and the Roman-Catholic parish house were built . In the south-western parts after the demolition of the St. Jacob Chapel and of the Priest’s Tower in 1898, the Credit Bank Building was built in the beginning of the century.
The square preserves with very few changes the aspect in the XVth and XVIth centuries, all the buildings being historic monuments,  being distinguished  the fortification elements, the public buildings or the  houses.
The buildings are high and have those dormer windows known as the “ eyes of Sibiu”.