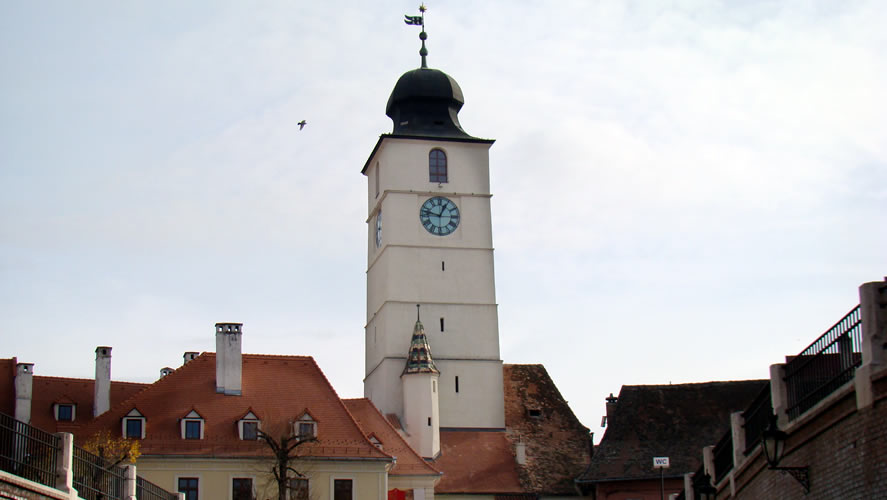 It is one of the most famous monuments of Sibiu.
It bears this name because it used to defend the entrance gate into the second precinct, situated in the immediate vicinity of the building which once hosted the City Hall of Sibiu, mentioned in the documents for the first time in 1324 (no. 31, Small Square, recently rehabilitated). The nowadays edifice is the result of several construction phases, the building having been super-elevated and even incorporated in a group of buildings. Only the nucleus erected at the level of the first floor was probably preserved from the initial building. The probable dating corresponds to the building of the second fortification precinct, that is the period between 1224 and 1241, in its initial form the building’s height not surpassing four stories.
Following an archeological probing, a coin from the time of the reign of Andrew II (1025-1235) was discovered in the defense moat of this precinct.
Complex rehabilitation works were carried out between 1586 and 1588, after the upper stories collapsed on February 17th, 1585, painter Johann David being trapped under the debris while painting the arch. After it was repaired several times after the 18th century, the tower underwent radical works in the superior part. In its nowadays shape, the tower is seven stories high, successively withdrawn, its facades being marked by narrow openings with the shape of ramparts. At the ground floor the tower has an ample passageway. The second tunnel is in fact under the building situated at no. 2, Large Square and it was opened in 1931.
On the southern wall of the tower there exist a series of stone relief representations of two lions, assumed to be part of the original structure of the tower dating from the 13th century. The access in the interior of the tower is made through a narrow door and by means of a spiraled stairway one can reach the superior floors. The mechanism of the clock may be observed on the penultimate floor, and the last floor represents an observation deck for the old city.
The tower had various uses over time, from a granary to an observation deck for fires, a location for temporary arrest and even a museum of natural sciences at the middle of the 18th century. Between 1962 and 1998, the tower hosted a section of the Brukenthal Museum displaying medieval exhibits.