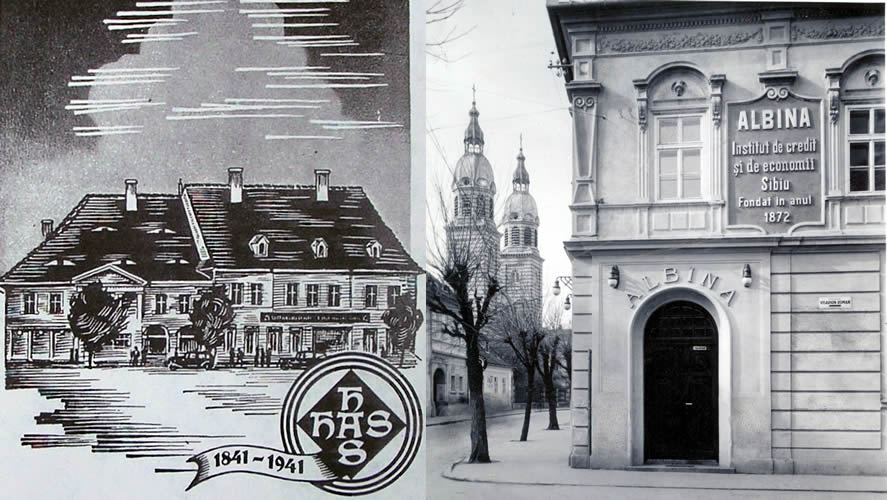 The first bank established in Sibiu in 1841 was Hermannstädter Allgemeine Sparkasse (Savings General House in Sibiu), the largest and most influential Saxon bank. Five years later, in 1846, the Institute of Loan and Pawn (Pfandleihanstalt.) is opened on today's Metropoliei Street, which operates until the First World War. The year 1868 marks the establishment of the first branch of a foreign bank in Sibiu, the Austro-Hungarian Bank, which was initially located in Nicolae Balcescu Street, until 1909 when the bank builds its own office building on Gen. Magheru Street, now headquarters of the County Council. In September 1921 the bank is liquidated in Romania.
In 1872, Landwirtschaftsverein (the Agricultural Society) establishes a bank credit (Bodenkreditanstalt), which will operate until World War II. Established by Visarion Roman, Albina Bank starts to operate in 1882 and it becomes the largest Romanian bank in Transylvania. In 1886, K. ung. Postsparkasse (the Austrian–Hungarian Postal Savings Bank) establishes the first local branch of a Hungarian bank in Sibiu. It will be followed a few years later by another large bank, Pester Ung Kommerzialbank (Hungarian Commercial Bank). Both will be liquidated in Romania after World War I.
On May 1, 1891, Siebenbürger Vereinsbank Aktiengesellschaft (Ardeleana Bank of Associations) begins to operate with the scope of developing the trade and industry and of organizing the settlements in Sibiu and Brasov. A year later it will open a large warehouse near the train station. After World War I, the Sibiu banking scene changes by the liquidation of some foreign subsidiaries and by entering the market of Romanian banks that open their own branches. The first bank that comes from the Kingdom is the Central Bank for Industry and Trade SA, in November 26, 1919. In February 1921, it followed the Romanian Bank, which undertakes an older bank, Banca Lumina, Discount Bank of Romania and National Bank of Romania, which takes the place of the Austro-Hungarian Bank.
Other local banks begin to operate, such as Oasia Bank, founded in 1925 by Ioan Petra Oasia from Sibiel (the bank will be led by Nicolae Petra and Ilie Floasiu) or the Bank of Industry and Commerce (Gewerbe- und Handelsbank A.G. Hermannstader). These banks will collapse on the eve of World War II or will be nationalized after the year 1947.

(General Savings House in Sibiu)
Hermannstädter Allgemeine Sparkasse bank was founded in 1841 at the initiative of Friedrich Michael Herber and modeled on the First Vienna Austrian savings banks. The bank had a capital base of 1,322 florins and was subscribed by 97 founding members. The bank was established on cooperative bases with precise Saxon character and was protected by a statute that prevented alienation of shares in the bank.
Between the years 1885-1910, the bank president was Karl Wolff and from 1887 the bank was converted into a public limited company. Due to its power, it became the central bank for small credit unions, following the type of Raiffeisen and Saxon consumer cooperatives. Karl Wolff even set up a central office for the consumer cooperatives in Sibiu, but given the Saxon traders' dissatisfaction, it collapsed.
In 1914, the bank had the equity of 1,500,000 crowns, of which the churches and Saxon foundations held significant shares. The bank had financial loan operations, mortgages and issued mortgage writings, performed mainly in the Netherlands. At the same time, the bank led an active policy of real estate investment and also got involved in providing financial support to local social and cultural projects.
The bank owned "Muntele de pietate" (Mount of piety) in Sibiu, it funded the construction of the new "Imparatul Romanilor" (Emperor of Romans) hotel, it supported the introduction of drinking water and sanitation, street paving, it built the public bathroom and the Sanatorium in Sibiu. The bank also contributed to the building of the railway segment Sibiu-Vintul de Jos, Sibiu-Fagaras and Sibiu-Agnita.
Around the bank, Sibiu has emerged as the Saxon regional financial center. It was a model for many other smaller banks and also for the Romanians in Sibiu who established their first bank, Banca Albina, following the Saxon model.
In the interwar period, the bank's chairman of the board was Hans Otto Roth. The bank had branches in Medias, Sighisoara, Cisnădie, Orastie, Brasov, Cluj, Bistrita, Arad, Santana, Timisoara or Lovrin. Its position was strengthened by the incorporation of several local banks such as Burzenländer Saxon Bank, Mediascher Bank, Bistritzer Sparkassen, Schässburger Vereinigte Gewerbe, Orastie Bank Loan, etc.

Albina Bank was established at the initiative of teacher Roman Visarion and with the support of several Romanian personalities including Timotei Cipariu, Iacob Bologa, Paul Dunca, Alexandru Mocionyi, Antoniu Mocionyi and David, Urs de Margina Baron. In 1867, teacher Roman Visarion makes the first attempt to create an economic institution aimed to support the Romanians in Transylvania and created the "Loan Society and Storage" in Rasinari, an institution that will collapse due to difficulties.
Vissarion will take the example of the Delitsch Schultze Saxon cooperatives and will establish what will become the first bank of the Romanians in Transylvania. After formulating the statute, he will contact several Romanian personalities from Transylvania and will request their support in establishing the bank.
Once the status is approved, it will be submitted to the Hungarian Ministry of Agriculture and Commerce in Budapest for approval by Mocionyi brothers, approval obtained in 1871. In the meanwhile, a program of underwriting the bank's shares begins to roll and it was completed in November 30, 1871 with the subscription of 3,000 shares and with great support received from the Romanian press.
On 14 March 1872, the general assembly for the bank foundation takes place, which will elect the Board of Directors, consisting of the chairman and members Mocionyi Alexander Paul Dunca, James Bologa. On 10 April 1872 the bank opens for public office. In 1873, Petra Nicolae Petrescu was appointed director of the bank. Among the personalities who worked at Albina Bank are Partenie Cosma (Executive Director from 1885 to 1915), Dr. Ilie Beu, Ioan Vătăşanu, Mihai Velici, Cornel Diaconovici (substitute secretary and director from 1890 to 1896).
Among the humanitarian aid and philanthropic actions, are worth mentioning subsidizing ASTRA Association and ethnographic museums in Sibiu and Lugoj, financing "Tara noastra" magazine, supporting and equipping communal libraries with books, contribution to building the civil girls' boarding school and a boys' boarding in Sibiu, granting scholarships and subsidies for schools throughout Transylvania, providing financial support for the Romanian women's' meetings in Sibiu, Lugoj and Brasov.

For 21 years, Albina Bank housed and financed daily "Students' Meals" in Sibiu, managed by Women's meeting from Sibiu where 50 underprivileged students from vocational schools were offered a free lunch. Among those who received these gratuities was poet Octavian Goga.