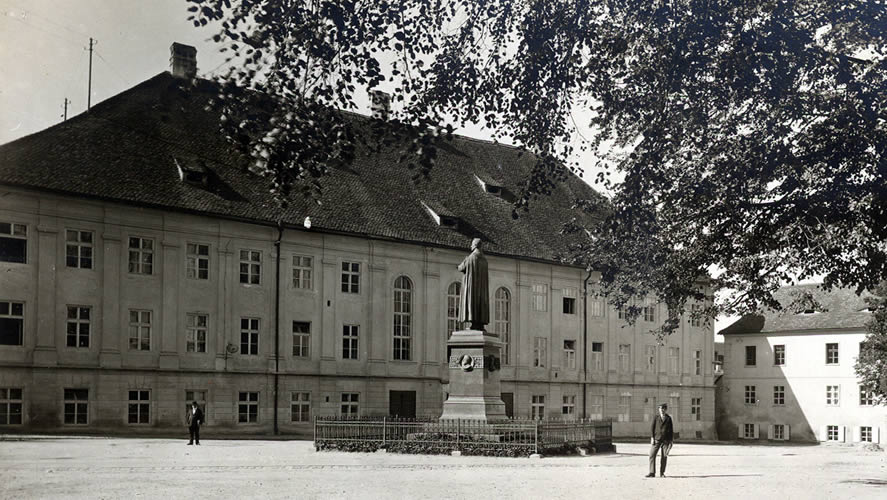 The first school in Sibiu has been documented in 1380 and functioned on today's Brukenthal College site and was also the first school in this part of Europe. Ever since the fourteenth century, Sibiu had a legislation that made education compulsory in churches.
In 1526, the Dominican monks opened a superior school, "Studium generale Cibiniensis", which will disappear however after the introduction of the reform. In 1692, the Jesuits in Sibiu established a Catholic gymnasium with Latin teaching that will operate until 1773, when the order is abolished. It will be reorganized in 1780 as the Catholic Gymnasium.
The Ursuline nuns Girls school, founded in 1734, had an uninterrupted existence until nationalization in 1949. In the early nineteenth century, the school's prestige was so immense that many landowners and merchants from Wallachia brought their daughters here. The language of instruction was German. In the dualist period, there were parallel Hungarian classes.
In 1786, Dimitri Eustatievici organized and conducted in Sibiu a "methodical process" to train future teachers. It is the first Romanian course in pedagogy and theology in Sibiu. At the beginning of the twentieth century, the school will turn into a theological-pedagogical institute under Andrei Saguna's guidance.
Evangelical theological-pedagogical education in Transylvania achieved the first strong form of organization in 1823, by using the draft prepared by Bishop Georg Daniel Neugeboren. It was divided into three sections: the seminar for teachers and preachers, the civil school and the gymnasium school itself.
The Franciscan nuns Institute was opened in 1864 shortly after six Franciscan nuns settled in Sibiu. In the beginning, classes were held in a rented house on 8 Dealului Street (Berggasse), but in time the number of students increased and the school purchased some surrounding land and the school premises were enlarged and extended with new multi-storey buildings. At the end of the nineteenth century, the Franciscan school will add a nursery, a preparatory school for teachers and a civil school.
Before 1919, the Saxons had a well-organized education system with a consistent plan and study program. The Saxons had several primary denominational schools; Evangelical Lutheran; two Evangelical Lutheran civilian schools (one for boys and one for girls); Evangelical Lutheran High School of Commerce; the Theological Pedagogical Seminary; the Evangelical Lutheran School (Brukenthal; the state school in 1780, which had a grand reputation throughout Transylvania and from 1864 it included the so-called "Real Higher School" (Obberealschule). The Saxons also had three vocational schools, crafts, two boys schools (one founded in 1842, another in 1872) and a vocational school for girls, founded in 1885 by the Society of evangelical women. Part of Saxon University's property was spent for maintaining these schools.
In the mid-nineteenth century, Romanians had two Orthodox elementary schools and one Greek Catholic. The catholic school was opened in 1783 near the church "between the pine trees". Shortly, the Orthodox schools were established in Maieri (Strada Lunga) and in the Josephine district (Justitiei Street). In 1875, a new Orthodox school was established for the Sibiu-Cetate parish and functioned in the parsonage on Mitropoliei Street.
In 1770, the imperial authorities opened the "Teresianum" orphanage, equipped with an elementary school with teaching in German until 1867, then in Hungarian. A Catholic elementary school was founded in 1774 under the auspices of the state, as a normal school and graduates were able to become teachers' aid and even teachers in the villages. In 1858, the normal school status was withdrawn and was given to the school associated with the Teresianum orphanage.
In the mid-nineteenth century, in Sibiu's surrounding area functioned two elite theoretical secondary schools: one evangelical, the other Catholic. In September 15, 1886 in Sibiu, through ASTRA's efforts (Transylvanian Association for Romanian Literature and Culture of the Romanian People), the first secondary school for girls from Transylvania was opened. After the Union, the school turns into high-school for girls (15 July 1919) and in 1924 it has been named "Domnita Ileana" ("Lady Ileana").
Also in 1919, the Romanian pedagogical education was reorganized by separating the pedagogical section of the Theological Institute and establishing the "Andrei Saguna" Normal School. In order to provide the best education possible, the pedagogical school in Sibiu was turned from a school with a four-year course into a school with two courses, the lower and the upper, with four years of study each.