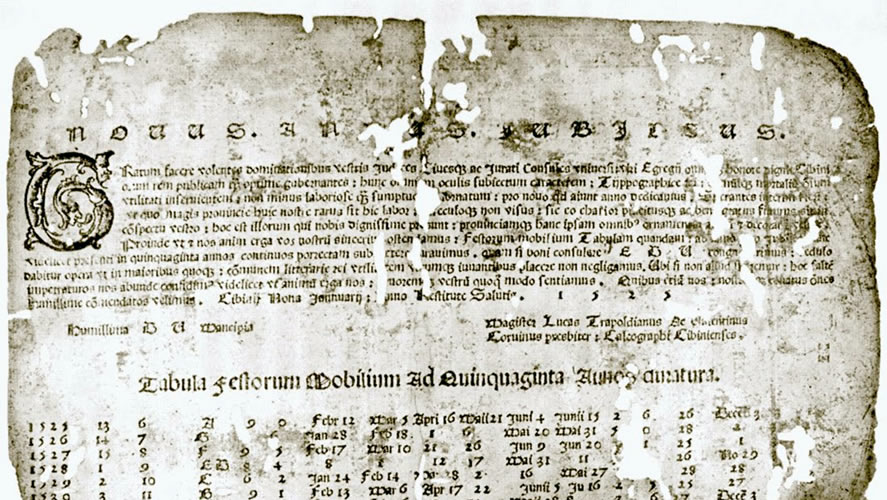 Printing in Sibiu was first attested in January 9 1525 by Lucas Trapoldner's typography. This is the first typography in Transylvania and the second one on Romania's present territory. Printing belonged to the Municipality. The first book printed in Sibiu is "Latin Grammar" by Thomas Gemmarius, in 1529. Dr. Sebastian Pauschner's book "Treatise on the Plague" is the first German book printed in Romania, in 1530. In 1544, Filip Moldoveanu prints the first book in Romanian: "Catehismul Lutheran".

The next typographer, Freutliger Gregor, worked between 1578-1580 and was later succeeded by Georg Creus who will print in 1583 the Transylvanian Saxons' law book, in Saxon and Latin. In 1591, the typography is run by Johann Heinrich Crato and after his death he is succeeded by Johann Fabritius. At the end of the sixteenth century, there will be approx. 30 books already printed in Sibiu. Fabritius died in 1601 and Simon Grüngras became in charge of the printing, until 1608. The next typographers were Paul Seel and Paulus Wolff (1610-1612) who printed the "Newe Almanach", in 1612. Following, came Jakob Thilo between 1612-1621 and at his death in 1621, the typography's inventory contained 190 printing copper molds, 64 ornament blocks and 339 wooden letters.

Along with the shift in ownership, the typography's name also changes, so from 1832 the typography will be called "Closius typography", until 1890. The typography was located on 11 Nicholas Balcescu Street. In 1751, the management of the city's typography is given to Samuel Sárdi (1705-1779), former apprentice and later Barth's journeyman. Samuel Sárdi died on April 27, 1779, but not before electing a successor in the person of Martin Hochmeister (1740-1789), son of a draper, who learned his trade at Johann Barth's Jr. shop.

For the first time, both Hochmeister's and Sardica's names appear on the same book, in 1778. In 1778, along with his son, Martin Hochmeister Jr. (1767-1837), then at age 11, switches to Roman-Catholicism, which will bring him many benefits and privileges from the imperial court. In June 1, 1778 , Martin Hochmeister Sr. publishes the first Transylvanian periodical paper Theatral Wochenblatt für das Jahr 1778. He is also the first one to publish textbooks for Romanian students in Sibiu, such as Bucoavna, published in 1783, a bilingual work with Romanian text written with Latin letters and difficult spelling. In 1778, Empress Maria Theresa grants him the privilege of opening a bookstore in Sibiu, one of the first bookstores in Transylvania, located in Piata Mica (The Small Square), near Turnul Sfatului (Tower Hall), as it appears in a library's catalogue, stored at the Brukenthal Museum.

In 1790, four typographies operated in Sibiu: the city's typography leased to Hochmeister, located on T. Popovici Street, where it also functioned Hochmeister's own typography; Barth's typography and Johann Gottlieb Mühlsteffen's typography. Martin Hochmeister Jr. takes over the family business in 1789 and between 1790-1801 he will publish the "Siebenburgische Quartalsschrift" and Sibiu's first tourist guide. Between 1805 and 1824, he will publish "Siebenbürgischen Provinzialblätter", the first publication of research and history of Transylvania. He moves the library into the house from Piata Mare No. 11 (Big Square), bought in 1828. After Hochmeister's Jr. death in 1837, his heirs will sell the printing, the bookstore and library to Theodor Steinhausser, who will edit "Der Bote Siebenbürger".

In 1882, Adolf Reissenberger is the new owner and from 1901 the typography is run by Friedrich Roth. During the interwar period, the Hochmeister's old typography on Timotei Popovici Street was named "Honterus". In 1826, Samuel Filtsch, the son of evangelical priest in Sibiu and trained at the Gerold printers in Vienna and the Brockhaus in Leipzig, will open a typography in Piata Mica (Small Square). In 1868, the typography was taken over by his son-in-law William Krafft, who renamed it "W. Krafft - Buchdruckerei, Buchhandlung, Linieranstalt und Papierdütenfabrik". He reorganized and relocated the typography in today's 10 Avram Iancu Street.

Krafft was born in 1833 and descended from a family in Sighisoara. His father, Friedrich Wilhelm Krafft, had a bookbinding workshop in Sighisoara and Bistrita and encouraged his son to pursue a profession in this field. He will study at the Johann Gott in Brasov, then in Sibiu, Timisoara, Pforzheim, Münster, Schwerin and Berlin. William Krafft will play an important role in publishing several Romanian papers and magazines, which will determine King Karol I to decorate him. He modernizes the entire publishing house and typography and even opens a branch in Sighisoara. He died in 1908.

Josef Drotleff Sr. is another key figure that will put his mark on the development of Sibiu's printing industry. He was first trained in the basics of the printing trade at Martin Hochmeister's branch in Cluj and then took a study trip in the German space. He will return to Sibiu, working at Hochmeister's typography. After a few years of activity and at his wife's insistences, he will become a freelancer and move to Orastie, where he builds a library in 1847. After the revolution, he will return to Sibiu in 1850 and will open a typography on 15 Xenopol Street and print the "Official Paper" in the three languages ​​of the country.

The business will be carried on by his son Joseph Drotleff Jr. (1839 - 1929). In 1877, he buys the place in 17 N. Balcescu Street where he moves his father's typography and library, which he will administer from 1887. In 1900, he rises new buildings in the backyard and expands the typography, which has become the largest in Transylvania. This is where two of the most important Saxon publications in Transylvania will have their offices and the printing premises (Siebenbürgisch-Deutsches Tageblatt, founded in 1874 and Landwirtschaftliche Blätter für Siebenbürgen). In 1922, the typography will merge with the Krafft company and will operate under the name "Krafft and Drotleff" until 1947 when it will be nationalized. After that, it will function as the State Printing until 1972, when the building is repurposed as an apartment building and the typography moved on Alba Iulia Road.

In 1850, Bishop Andrei Saguna will open the Orthodox Diocese's typography that will publish Telegraful Roman (the Romanian Telegraph). The typography still operates today and it is the oldest one functioning in Romania. In the second half of the nineteenth century, Sibiu was the undisputed center of the Transylvanian press and printing. In 1881, there were six printing houses in Sibiu (Closius, Steinhaussen, Krafft, Drotleff, the Archdiocesan printing and Adolf Meltzer).

In 1890, Tribuna's Typographic Institute opens on Mitropoliei Street which published, along with Tribuna newspaper and its literary supplement, the paper Foaia poporului (in 1892). This is where the Memorandum from 1892 will also be printed. From 1896, Tribuna and Foaia poporului's typography will be named "Tipografia", located on 15 Tribunei Street. After 1903, it is taken over by Josef Marschall and after the war Nicolae Bratu changes its name to "Tipografia poporului ("People's Typography"), which will operate until his death, in 1941. Nicolae Bratu learned the printing trade in Germany, where he attended the Academy of Graphic Arts in Leipzig.

During the first decade of the twentieth century, new typographies appear, some only for a short while, such as Johann Gürtler's typography on 5 Fleischerg or the one run by Ludwig Budovsky on 12 Sporerg, or others that opened after the war, like Georg Haisen's typography, located on Faurului Street during the 20s, which was moved on Filarmonicii Street during the '30s. The Interwar period brings massive changes among the typographies in Sibiu. Undoubtedly, the largest typography remains Krafft & Drotleff. From all the other typographies that operated in the nineteenth century, only the Diocesan typography was still functioning. On the premises of the old Hochmeister's typography, it operates Honterus typography.

Also, new typographies are opened, including Josef Botschner's printing on Avram Iancu Street, Josef Schmidt's printing on Faurului Street, Merkur typography on 1 Rosmaringasse or the Publishing and Printing "Ostdeutsche druckerei und Verlags A.G.", on the ground floor of the Brukenthal Palace, until 1930. In 1922, the Orthodox Church opens "Lumina satelor" typography and library that will operate until 1934, on 5 Avram Iancu Street. In 1930, a printing workshop will open in Bobel house at No. 16 where the supplement "Oastea Domnului" was published. Also, at number 16, the paper "Curierul negustorilor" (Merchants Courier) had its offices.

“Tipografia si Prima Fabrica Romana de Stampile din Ardeal” ("The typography and the first Romanian stamps factory in Transylvania) owned by Octavian Vestemean opened in August 1922 and at first it operated on Tiglariei Street. In 1928, it was moved on 14 Tribunei Street where it operated until 1941, when it was moved again to 16 Avram Iancu Street. This typography printed anything from professional monographies, literary books, poetry, local newspapers and magazines, to religious books, local official bulletins, calendars and medical records. To save his home from nationalization in 1949, the owner "donates" the typography to the state. Octavian Vestemean does not move away from books and opens a bookbinding workshop, where he works as a freelancer until his death, in 1978.