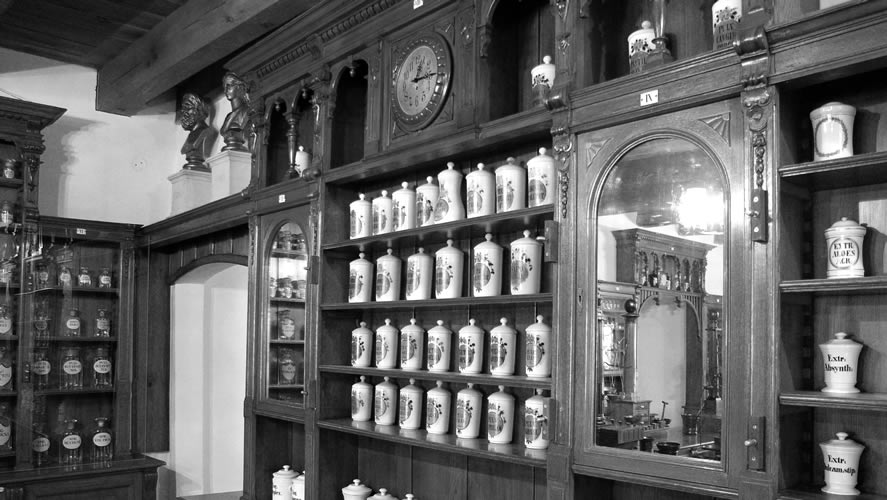 The first pharmacy in the present territory of Romania was opened in Sibiu.
The first attesting document dates back to 1494 when the name of a pharmacist is mentioned: Johannis. In 1704, pharmacist Georg Vette buys the city's pharmacy and moves it into his own houses, in today's Casa Albastra (Blue House). This is when the pharmacy is renamed "The Black Eagle" (Zum schwartzen Adler). In 1734, after Vettte's death, the pharmacy is bought by Michael Ahlefeld who moves it back into the old office, located close to the Catholic Church. In 1790, the pharmacy is bought by the Müller family and it will remain in their possession for 159 years. In 1899, Carl Müller sen. moves the pharmacy on the ground floor of the Brukenthal Palace where it will remain until nationalization occurs, in 1949.

The second pharmacy opened in Sibiu was a military pharmacy established in the sixteenth century. In 1795, the pharmacy becomes the private property of Franz Theodor Issekutz and is called "At the Imperial Eagle". In 1838 Issekutz sells both the pharmacy and the house to I.C. Molnar who runs the pharmacy until his death, in 1838. His son Carl Molnar (1838-1853) follows. In 1858, the pharmacy is leased to William Platz and it keeps the name "Molnar's Pharmacy". In December 1899, the pharmacy moves from Metropoliei Street to Balcescu Street, in today's place of Pharmacy No. 24, under the name "Zum Reichsadler". The pharmacist was Gustav Breinstorfer. In 1911, the pharmacy appears under the name "Zum König von Ungarn" and after World War I, as "Viktoria". On July 1, 1936 Victor Lieb takes over the pharmacy, but in 1949 it was nationalized and became State Pharmacy No. 6 and later Pharmacy no. 24, the name under which it still operates today, being the oldest pharmacy in Sibiu and also the oldest pharmacy operating at the same address (1899).

The third oldest pharmacy in Sibiu dates since 1600. From 1760 the pharmacy is moved in Piata Mica (The Small Square) no. 26, having Josef Schäffer as pharmacist. In 1809, the pharmacy was bought by John Georg Kayser who renames it "At the Black Bear" (Zum Schwarzen Bären). From 1852 the pharmacy is owned by Gustav Adolf Kayser and the pharmacist was Friedrich Krauss, between the years 1867-1874. Between 1875-1878 the new pharmacist is Karl Heinrich, who after Kayser's death in 1878, buys the pharmacy and owns it until 1898, when he died. He was Director of the Cabinet of Natural history (Naturhistorisches Kabinet). From 1903 the pharmacy was taken over by Guido Fabritius who owns until his death in 1949, when it is nationalized. It continued to function as a pharmacy until the 70s when it is transformed into the first pharmacy museum in Romania, opened in 1972.

The fourth pharmacy opened in Sibiu, "La Coroana", was founded in 1762 by Johann Gottlieb Schuster, born in Warenbruck, Saxony. After his death in 1802, his son, Friedrich Schuster, owned the pharmacy. He married pharmacist Kayser's daughter. Not having children, Schuster leaves the pharmacy to Kayser's niece, who gets married in 1836 with Josef Jikeli, who becomes co-owner of the pharmacy. The pharmacy is located on the ground floor of a house built across Ocnei Street, in Piata Mica (The Small Square) in Jikeli's houses. In 1848, when houses started to be demolished, the pharmacy moved on 1 Ocnei Street where both families and Jikeli Schuster lived. After Jikeli's death in 1870, his nephew Karl Jikeli becomes the owner and builds the house on the stairs (2 Ocnei Street) and moves the pharmacy into the new building in 1882 under the name "Crown" (Zur Krone). In 1904, Pissel Karl's & Schmidt's pharmacy opens and from 1911 to 1942 it is owned by just Pissel Karl. From 1942 until nationalization in April 1949 the pharmacy appears under the name of "Fritz Zober's Crown" pharmacy. It continued to run as a pharmacy under the communist regime and (Pharmacy No. 20) and it closed in the early '90s.

The fifth pharmacy in Sibiu, "At the Lion" (Zum Löwen) was opened in 1780 by Paul Friedrich in Piata Mare (The Big Square), near the Post Office (now No. 9). After Friedrich's death in 1795, the pharmacy was taken over by Petrus Sigerus. The Sigerius family owned the pharmacy until 1836 when August Teutsch sen. bought it. In September 1884 Teutsch moves his pharmacy to today's no. 10. After his death in 1879, the pharmacy remains in August Teutsch's Jr. possession until 1911 when it was bought by Albert Zink, who keeps the Lion name, just like his successor Emil Wermescher does, who appears after the war until 1949, when the pharmacy is nationalized. It functioned as a pharmacy until 2012.

The next public pharmacy opened in Sibiu in 1880 under the name "At the Golden Cross". It was owned by Friedrich Morscher and located on 12 Turnului Street. In 1896 it is purchased by Edmund Rummler and in April 1899 he changes its name to "The Genoese cross" ("Genfer Kreuz") and moves it on current 2 Tordaseanu Street.

After World War 1, the pharmacy "Golden Cross" (zum goldenen Kreuz) is opened by Heinrich Hertzberg at 14 Tower Street. In 1942 it appears under the name Diana of Siegfried Tiem, until nationalization in 1949. It continues to function as a pharmacy and it is the second oldest in Sibiu.

In 1903, "At the Angel" pharmacy (Zum Engel) is opened on Reconstructiei Street. From 1918 the pharmacy is run by Eugen Wittmayer who moves it on 40 Balcescu Steet and preserves the name. It is later moved to 9 Avram Iancu Street under the same name and run by Wittmayer and Binder. From 1933 pharmacy is taken over by Dr. Hans Binder until 1949 when it is nationalized. It continued to serve as a pharmacy and is currently the 3rd oldest in the city

On September 23, 1920 Victor Pop opens the first Romanian pharmacy in Sibiu, called "Unirea" Pharmacy, located on 26 Balcescu Street. In 1926 he moved it to no. 36, where it operates until nationalization in 1949.

Other pharmacies opened during the interwar period include the Stefan Moga Pharmacy (1923) on 9 May Street, named "Minerva" until the nationalization; the "Izvorul tamaduirii" pharmacy owned by M. Jantea (1937) in Piata Mare (The Big Square) no. 13 (The Lutach House) and closes in 1948; the "Izvorul sanatatii" Pharmacy on Ocnei Street, owned by I. Nicolae, the "Erselia Gemanescu" pharmacy on Avram Iancu Street; "Aurora" Pharmacy owned by Constanta Marinescu on Victoriei Blvd. and the "Horatiu Albescu" Pharmacy on Turnului Street.