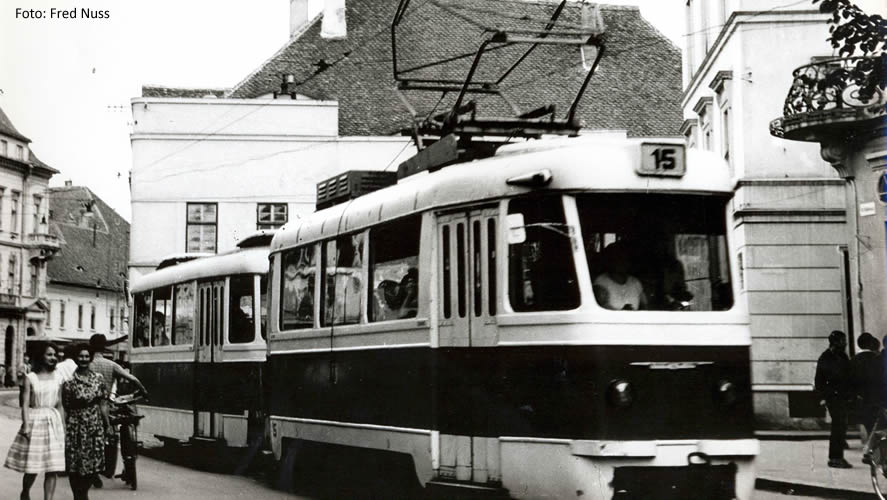 At the end of the nineteenth century, the connection between the train station, downtown, Lower Town and the remote neighborhoods was made by carts and carriages. People also used carts and carriages to travel to recreation areas, such as "Sub Arini" park and "Dumbrava" forest. The first proposal for the implementation of an electric tram in Sibiu was made by Carl Wolff in 1893. Although the proposal was theoretically accepted, it has not been put into practice immediately. Carl Wolff is the one who founded Sibiu's public transport, by creating the power plant at Sadu, required for the function of the first means of transportation: omnibus.

Thus, on August 3, 1904, the first omnibus brought from Budapest was put into operation. This ancestor of today's trolley was equipped with an electric engine and wooden wheels. This original means of transportation traveled on the route Train Station – Nicolae Balcescu Street (in front of the Telephone building). Sibiu was the first city in the country where people could travel with such a vehicle. The omnibus, however, did not pass the trial period. Not only because it has proven to be very noisy, but it was also very unstable - it easily overturned and caused many accidents. For these reasons, on October 18, 1904, the city dropped the omnibus.

The failed experiment with the omnibus has forced the locals to reconsider Carl Wolff's initial proposal for the electric tram. Thus, on November 8, 1905, the first tram route Train Station Square – "Sub Arini" park was inaugurated. The wagons were made in Budapest and the route was extended to May 15, 1910, until Dumbrava forest (at the end of today's Bahluiului Street). The connection with the Lower Town is established in August 10, 1912 when a new line-up route is opened between the Train Station Square - Cibin Market and in May 1915 the tram line extends further to Dumbrava Inn.

On 3 august 1918, the tram shed was being built near the power plants and on September 25, 1927 it started using the line extended from Lower Town Cibin Square to the Turnisor Station and Cluj Square. In 1925, 20 years after commissioning, 3,950,197 people have traveled by tram and Sibiu had 14 wagons fitted with engines that provided 30 seats of which 16 were seats.

During 1946-1948, the interurban tram route was built, connecting Sibiu to Rasinari. Although it was initially planned that Rasinari would connect to the railway system (the connections between Vintu de Jos and Brasov were already done), this was not possible, due to technical reasons. The tram line that still operates today was built in a "barter" system: the required materials (but mostly the workers), were paid, not in money, but in grains. This interurban route initially functioned with a diesel engine and was only electrified in 1951.

In the mid '60s, the tram line to Turnisor Station is abandoned and in the early 70s the tram line is abandoned inside the city, and only remains active on the Rasinari line. In august 1983, the trolleybus is implemented and initially operated on two routes and since 1985 on three routes. The electrical trolley network expanded in the coming years in the following areas: Libertatea, Piata Cibin, Vasile Aron, Lazaret, Balanta I, Independenta II, Strand, Valea Aurie and the Airport. In 1990, Sibiu had about 10 transportation routes served by approximately 35 trolleybuses.