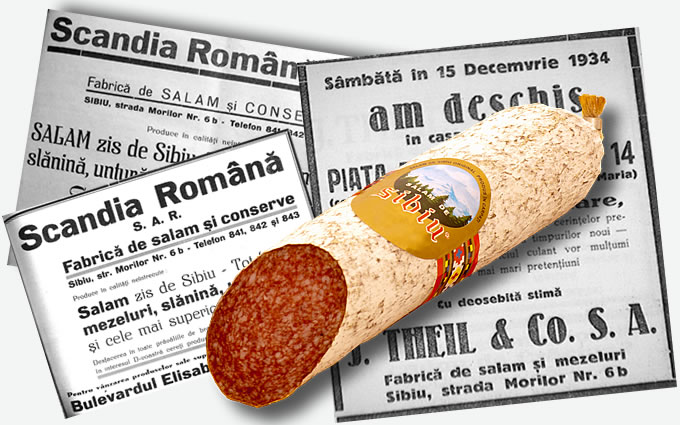 The first Sibiu salami factory was opened in 1850 by Johann Kessler. The business was taken over by his son, Rudolf Kessler (1887-1926) under the name Johann Kessler & Söhne. He participated in 1889 at the World Exhibition in Paris and also at exhibitions in Vienna, Cologne, Brussels and Linz, where he won numerous medals and awards for the factory's high quality products. The factory is bought in 1928 by Alfred Dahinten who moves it from Sebes to Sibiu, on Valea Mare Street.

In the last quarter of the nineteenth century, there were 16 salami manufacturers operating in Sibiu. The most important ones, in chronological order, are: Josef Unterer, the business was continued by his sons Karl and Hans Unterer until the first decade of the twentieth century; Adolf Fonni whose business also runs until around World War I; Wilhelm Hartmann, on Baii Street, was the first mechanized sausage factory in Transylvania using steam production cars; Anna and Johann Luckardi, active until the end of the nineteenth century; Georg Rummler on today's Somesului Street, the business was carried on by his sons Adolf and Edmund until after World War I; Anton Markoczi, active until the end of nineteenth century and Leopold Weiss, who, in the first decade of the twentieth century, will join two other manufacturers under the company Weiss, Pollak & Schlesinger. In the first decade of the twentieth century, the largest producer of Sibiu salami was Nussbacher Gustav (1858-1925) who will donate the city Schiller's bust.

Toward the end of the nineteenth century, a dry salami started to be made in Sibiu, called "winter salami", which will be quickly appreciated and sought out throughout Transylvania. At the beginning of the twentieth century the recipe will be taken over by other manufacturers in other areas that would tell their clients that the "salami is made from Sibiu recipe".

One of these manufacturers was Josef Theil (1875-1932) who owned a salami factory in Medias at the beginning of the century. In 1922 he moved the factory to Sibiu on Morilor Street, under the name "Theil & Co. AG. Salami und Selchwarenfabrik". With great skill and vigor, Theil manages to gain recognition in the field, soon becoming a popular and appreciated brand. The modern technologies for that time, the highest quality products and selling on an increasingly wider market are all factors that contributed to his increased reputation. The factory soon became the most important producer of salami in Transylvania and distributed under the brand "the authentic Sibiu salami".

The Theil factory would participate almost annually at prestigious events that further expanded the company's reputation. The factory had showrooms in all major cities in the country. The factory's capacity during the 30s reaches 20 wagons of salami per year, plus a variety of other products: specialties and canned meat (ham, liverwurst, liver pate, goulash, tinned sausages). Their own retail store in Sibiu is located at 11 Ocnei Street and in December 1934 Theil opens a modern factory showroom in Piata Mare (The Big Square) nr. 9.

In 1940 the Theil factory closes and the buildings are bought by Robert Berghaus from Germany who renovates and equips them with modern machinery and the factory reopens in 1941 under the name Romanian Scandia S.A.R. Until 1943 this is where the entire necessary amount of canned food for German army on the Eastern Front has been produced. Scandia is nationalized in 1948, but the factory's name is preserved. In 1963, Scandia registers the trademark "Sibiu", thus being the only one to use the name for meat products. Unfortunately, major shortages are found in the manufacturing process, which led to the loss of this right in the 70s and 80s and Sibiu salami started to be made elsewhere.