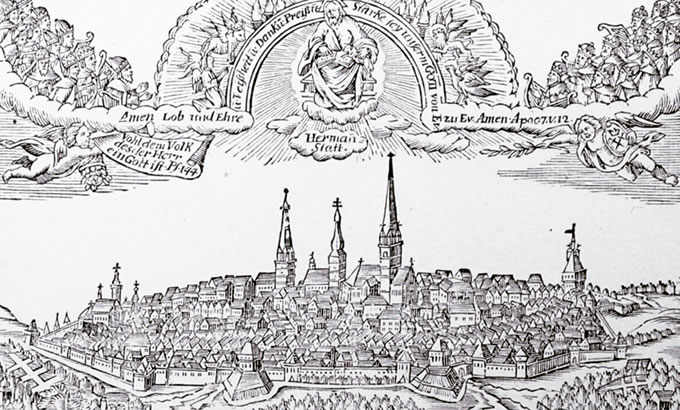 The Saxon University (in Latin, Universitas Saxonum) was a form of autonomous organization of the Saxons in Transylvania that included all the Saxons living on the royal land. This form of legal unity was explicitly confirmed by King Matthias Corvinus's ratification of the Andreean Diploma, in 1486. As a result, the Saxon community in Transylvania became a "political nation" along with Hungarians and Székely and was represented in Transylvania's Diet. The Saxon University incorporated the seven seats of Sibiu (Orastie, Sebeş, Miercurea, Sighisoara, Nocrich, Cincu and Rupea), the seats of Seica and Medias (formed later), as well as Brasov and Bistrita Counties.

The term "University" had several meanings and corresponded to the following committees:

- All Saxons from the Emperor's land and the privileged territory;
- The representatives' assembly of the entire community, thus the General Assembly (Conflux) meeting twice a year;
- Sibiu council and leading officials, «The delegated University" (delegierte Universität), dealing with problems during the period between the Assemblies;
- Especially in the modern period, it represented a political body endowed with a mandate to negotiate, which was led by a committee;

The University held general meetings at least once a year, on St. Catherine's day (November 25). The highest dignitary of the Saxon University was the Saxon's committee (Comes Saxonum). The elected deputies were in charge to solve the most stringent problems and disputes within the community. After three centuries of operation, in 1781, the reform promoted by Joseph II abolishes the constitution of the states, including the Saxon University's autonomy. The disposition shook to the ground the Saxon nation and their secular autonomy. Although the Saxon University continued to exist, from there on it gradually lost its influence and prerogatives.

In 1876, the National Saxon University was abolished, its work continued, however, as a foundation, without having the previous prerogatives. By the law issued on June 1, 1937 and published in the Official Gazette no. 124, of 1.VI.1937, the Saxon University Foundation was completely disbanded and its entire patrimony of goods was divided between the Evangelical Church of Augustan Confession in Romania, the Saxons in Romania and the Romanian Cultural Society "The cultural settlement Mihai Viteazu", which was founded by the same law.