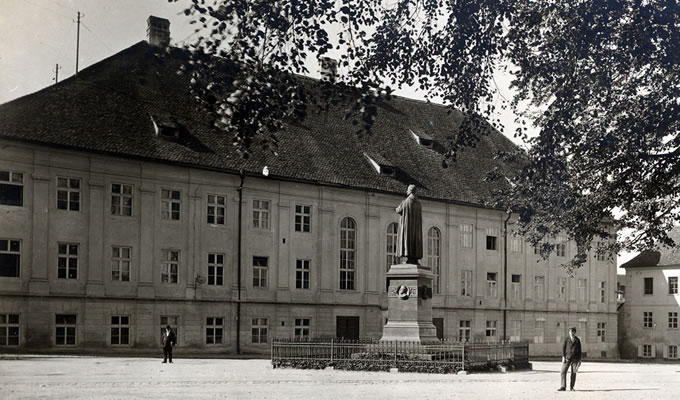 The first documentary mention of the existence of a school located on the premises of today's college gospel high-school dates from 1380 and comes from a "Church's spending records": "Item das man den schole hat gemacht XIX florin und 1 ort", meaning "specifies an expense of 19 florins and a shortcut for the repair of schools". The text mentions the expenses for school repairs of 19 florins and an ort.

In 1545, a new building is raised in the same place and today's building will be built between the years 1779 to 1781. In 1555, the school becomes a gymnasium school and since 1578 it becomes a "Gimnasium Academicum". The oldest internal regulations, called "statuta scholae Cibiniensis", date from 1598 and are also the oldest in Sibiu. Starting with the 1756-1758, the school functioned under the "Gymnasialreglement" of the Austrian Empire and from 1850 the gymnasium school was reorganized.

At mid nineteenth century, the gymnasium included an elementary school, a preparatory school for middle school, Real school (vocational, founded in 1842), the gymnasium and pedagogical and theological seminary (opened in 1788). The teaching staff consisted of 23 people. The school year 1853/54 was attended by 276 secondary school students, of which 206 were German, 52 Romanian and 18 Hungarian.

Towards the end of the nineteenth century, the gymnasium will be reorganized again. The Seminary (in 1878) and the elementary school (in 1897) will receive new locations, in the old building remaining the gymnasium classes and the Real school. Between 1878-1884, a Civic school for boys (Bürgerschule) will operate within the gymnasium. Among the directors that led the evangelical gymnasium during the nineteenth century are Johann Göbbel (1847-1854), Joseph Schneider (1854-1861), Gottfried Capesius (1861-1876), Moritz Guist and Karl Albrich.

In 1921, the school received the name "Brukenthalgymnasium", in memory of the man who ruled the Principality of Transylvania between 1777-1787, Baron Samuel von Brukenthal, who donated the gymnasium important assets. A year later, the school's choir and "Blas" fanfare is assembled by Franz Xaver Dressler. It is decided that the Real school would merge with the high-school. In 1937, they school's gym is built, which later becomes an assembly hall. The school goes under the German ethnic group leadership, but after two years it is being returned back to the church.

Between 1944-1946, the Red Army used the school building as a hospital. In 1948, the gymnasium is abolished by the communist government and the building will be used by other schools until 1954, when the gymnasium is reestablished under the name "Medium Boys School no. 2". During the communist period, it was called the School of Mathematics and Physics no. 1. Until 1990, the high school has operated as a school with teaching in German for the German minority in Romania. Although most ethnic Germans eventually emigrated from Romania, the high school and gymnasium continue to function with classes taught in German, but most students are Romanians. In autumn 2001, the Ministry of Education changed the school's name and title to National College "Samuel von Brukenthal".