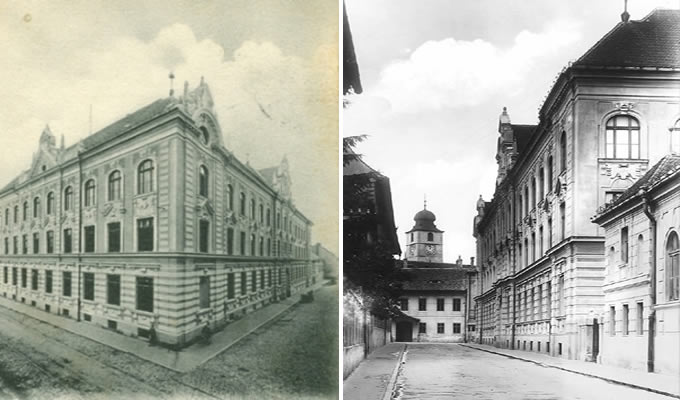 In 1692, the Jesuits establish a Catholic gymnasium in Sibiu with teaching in Latin. The first premises of the school was in a "low and old" building close to "La Vulturul" (At the Black Eagle) pharmacy in Piata Mare (The Big Square), on today's City Hall building. Later, the school moved to the top floor of the house located at the corner of Metropoliei and S. Brukenthal. After raising the Jesuit seminary building in Piata Mare in 1739, the Latin Gymnasium moved here.

In 1773, due to the abolition of the Jesuit Order, the college interrupts its activity until 1780 when Emperor Joseph II approved the reorganization of the gymnasium, under the name Gymnasium regium Cibiniensis. The school was led by the local Roman Catholic chaplains. Teachers were Catholic priests and Latin remains the language of instruction. In 1789, shortly after its organization as Gymnasium regium, the school will move to Piata Mare (The Big Square), next to the Catholic Church, in the former residence of the Jesuits, remaining there until 1898.

The Latin period was good for Romanians, one third of the students were Romanians. After the revolution of 1848-1849, the Transylvanian gymnasiums were reorganized on Thun Minister's Entwurf (December 1849). Duration of the studies is raised to eight years. In 1850, Romanian language is introduced as the study language and the teacher of Romanian was Antonie Vestemean, from Vestem.

In 1853, the Royal Gymnasium in Sibiu turns into a state institution, maintaining its Roman Catholic confessional character. Directories use the name K. k. kath. Staatsgymnasium in Hermannstadt. The confessional character will be abolished in 1862. From 1868/1869, Hungarian became the language of instruction in secondary schools, continuing until 1918/1919. Even in the Hungarian period, most of the students were Romanians. In 1868/1869, of the 389 enrolled students, 222 were Romanian, 107 Germans, 55 Hungarians, one Jew and four other nationalities.

The Gymnasium moves into the new premises built in 1898, the building in which it still functions today. From 1919, the institution adopts Romanian as the language of teaching, being organized under the laws in force in the Kingdom, thus receiving the name of high-school and the right to adopt the name of the great Romanian scholar and patriot, Gheorghe Lazar.

During this time, the structure of the curriculum has undergone many changes, by going through the eight and seven high-school classes (1919 - 1948), middle school / high-school with eleven and ten classes (1948 - 1965) or twelve school classes starting in 1965. In 1992 - the anniversary of three hundred years of existence - the institution received by the Minister of Education the right to call itself "Gheorghe Lazar" College and from the school year 1999/2000 receives the title of "Gheorghe Lazar" National College.