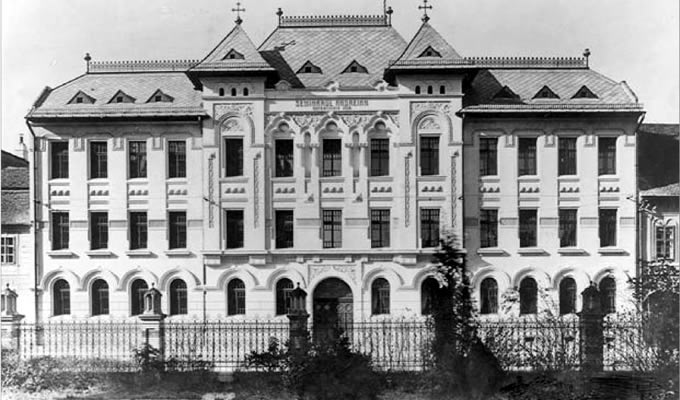 In 1786 in Sibiu, Dimitri Eustatievici organized and led a "methodical course" for training future teachers. It is the first Romanian course in pedagogy and theology in Sibiu. In March 15, 1811, young professor Gheorghe Lazar from Avrig (1779-1823), who studied Philosophy and Theology at the University of Vienna, was appointed, which marked a new era in Sibiu's history of education. Due to some disagreements with the bishop Vasile Moga (1811-1845), Gheorghe Lazar led the "school of priests" in Sibiu only until the autumn of 1815, after which he went to Bucharest.

The work was continued by the new teachers Moise Fulea (1814-1849) and Ioan Moga the "theologian" (1816-1848), both having studied Theology at the University of Vienna. In 1821, the Diocese succeeded to buy a house in Sibiu, on 7 Nicolae Balcescu Street (then Heltauergasse). The space was used both as episcopal residence and as a place for the school's classes. The year 1846 marks the beginnings of a new stage in the history of Sibiu's theology school, due to Andrei Saguna's appointment as "Vicar General" of the diocese. That year, the Theology course was extended to a full-year course and included a new discipline.

The Orthodox Diocesan Synod, held on March 12, 1850, will decide to turn the clerical school into a Theological-Pedagogical Institute. Saguna solved the school manuals issue by opening a diocesan printing in 1850. Starting with the 1852/1853 school year, the clergy course was extended to a 2-year period and eventually to 3 years, from 1861.

Until 1865, Bishop Saguna led the institute and his organization lasted for decades. In December 1854, Saguna elaborated the School rules for the Diocesan Institute's clergy and educators, a handbook of 16 articles for future priests and teachers. In 1865, Saguna was made Bishop, so he stepped down from his direct leadership position and appointed a new director. In the same year, on 1 June, he published the school's first regulation book, called Instructions for the Director, professors and the priest of the Greek-Catholic Pedagogical Archdiocesan Institute.

In 1864/1865, the institute gives up the improper building on Balcescu Street and moves into the building acquired by Saguna from in Mitropoliei Street. This also marks the opening of the students' boarding, where 50 students will receive free hosting, with some financial help received from the government. Given the concern for some of the most unprivileged students, they will receive free hosting in the bishopric seat beginning with 1853.

As a result of the memorable act from December 1, 1918, some profound transformations affected the Institute during 1919. Now, the "teaching section" of the institute became the "Andrei Saguna" Normal School" with 8 classes, but was still under the Church's leadership. In 1921/1924, the "theological section" became Andreiana Theological Academy with 4 years of study (in 1943 the institution received the right to confer a degree in theology). A new stage in the history of Sibiu's theological school starts in 1948, when it became the Theological University Institute, with the mission of forming priests for parishes in Transylvania and Banat Bishop Seats.

The final stage in the history of the institution began in 1992, when it was enclosed in the "Lucian Blaga" University of Sibiu, under the name "Andrei Saguna" Faculty of Theology. Following this date, the faculty was reorganized into three departments: Pastoral Theology for preparing future parish priests and teachers of Religion; Theology-Letters (with "subsections" for Romanian, English, French and German), which prepares teachers with double specialization: Religion and A Modern Language; and Theology – Social Studies, which prepares students for this specialty. Since 2005, the Faculty's departments were reorganized as: Pastoral Theology, Theology Teaching, Theology Social and Sacred Art, but unfortunately the faculty only provided three years of study. Since 1994, postgraduate master courses were organized with one year of study and since 2005, with two years. The doctoral programs are maintained.

Among the Institute's professors, 16 of them were elected members of the Romanian Academy (5 holders and 5 honoraries), plus three bishops from Sibiu that were not teachers (Andrei Saguna, honorary; Vasile Mangra, holder, and Antonie Plamadeala, honorary). Beside them, 10 former students have been chosen for the country's supreme cultural forum. Many professors and graduates have worked at ASTRA from its beginnings until today. In the last 50 years, many teachers have worked in various branches of the Churches' ecumenical council (World's) or in the Conference of European Churches.