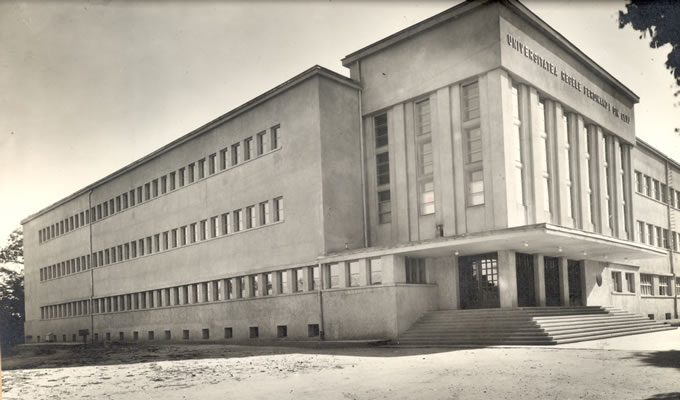 Following the Vienna Diktat of 30 august 1940, Romania was forced to cede northern Transylvania to Hungary and the "Ferdinand I" University from Cluj took refuge in Sibiu (1940-1945). It was a major concern to find proper space for all university departments and their annexes. In the new building prepared for "Domnita Ileana" High School (not yet entirely finished), the faculties of letters, history, law, library and the University Rectorate were installed. The former Herma factory became a board for boys and was named "Avram Iancu" Board; it was inaugurated on March 22, 1942.

In the building at the end of Victoriei Boulevard, in the former officers' Pavilion, were installed the Museum of Romanian Language and the University's Institute of Hygiene. At first, the students' cafeteria functioned in one of the pavilions from the Samples' Fare and Exhibition. The right wing of the Tax Directorate, on 1-3 Victoriei Bdv., was designed in 1941 as a Student House which included a gym, a conference hall, an entertainment room, a buffet, a rehearsal hall, etc.

Through all these years, Sibiu enjoyed the presence of Europe's first-rate intellectuals from Cluj who held conferences, established socio-political, cultural, scientific publications and formed literary circles. After 1945, 25 years would pass until Sibiu would become a university centre again. It will happen in 1969 when the Faculty of Philology and History of Sibiu is established, as part of "Babes-Bolyai" University in Cluj. The inauguration took place on September 16, 1969, in a festive atmosphere. In 1971, the Faculty of Economics and Administration was added and later the Faculty of Mechanical Engineering, TCM specialization. The three faculties amounted in 1976 the Institute of Higher Education Sibiu, separate from the University in Cluj. In 1984, the humanist faculties were abolished, leaving only the mechanics as part of the Polytechnic University of Cluj.

After the collapse of the communist regime, the following faculties reopened: Letters, History, Law, Medicine, Textiles and Food Technology, Engineering and Sciences. In the autumn of 1990 the University of Sibiu was constituted - in 1991 was extended and the Faculty of Theology also became part of the University. The same year, the Technology and Information College was inaugurated. On 12 May 1995, the University of Sibiu was named after the distinguished Romanian writer and philosopher, Lucian Blaga.