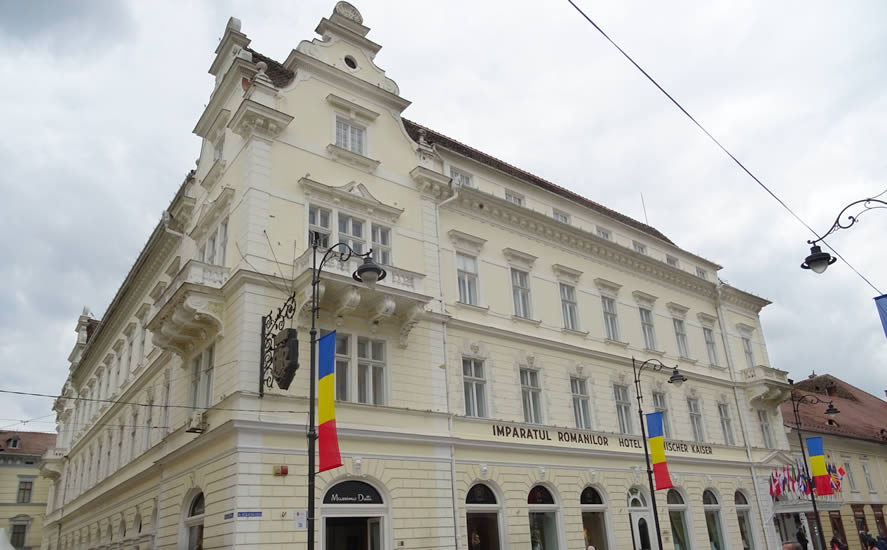 A  basement, ground floor, two upper floors and attic building, located at the intersection of Balcescu and Xenopol Streets, exhibits a facade with eclectic decorations and various ornaments.
The facade is treated with even more significant slugs around the windows where they form mascheroni frames at the top. Above the restaurant’s entrance appears the figure of an emperror. Each wing is covered in ridgeds.

- The eclectic decorations facade (human masks, etc)
- The lounge with the sliding roof (1927)
- The gateway from Xenopol Street with the original gates that keep the initials HAS (Hermann st. Algemaines Sparkasse) - 1895

In June 12th 1894 the construction of the hotel’s new building is started, being funded by the General Bank of Savings, which becomes also the owner. Architect: Friederich Maetz.
In September 7th 1895 the new hotel opens which originally had a restaurant and 44 rooms.
Instead of today’s great lounge, there was an open courtyard surrounded by arcades with a fountain in the middle (Arkadenhof).
In August 27th 1927 the lounge on the place of the former garden is opened. It had a glass-sliding roof, which was manually operated by a crank, kept until 1974.
Between 1941 –1944 Lucian Blaga and other Romanian intellectuals attended the restaurant.
In 1948 the hotel is nationalized.
In 1972 in the second courtyard of the Blue House to Xenopol Street a summer garden is being arranged, having at the entrance two stone lions, the work of the Sibiu sculptor Kurtfritz Handel. It was eradicated in 1985 when another extension of the hotel was built instead.

The hotel hosted an impressive number of personalities: