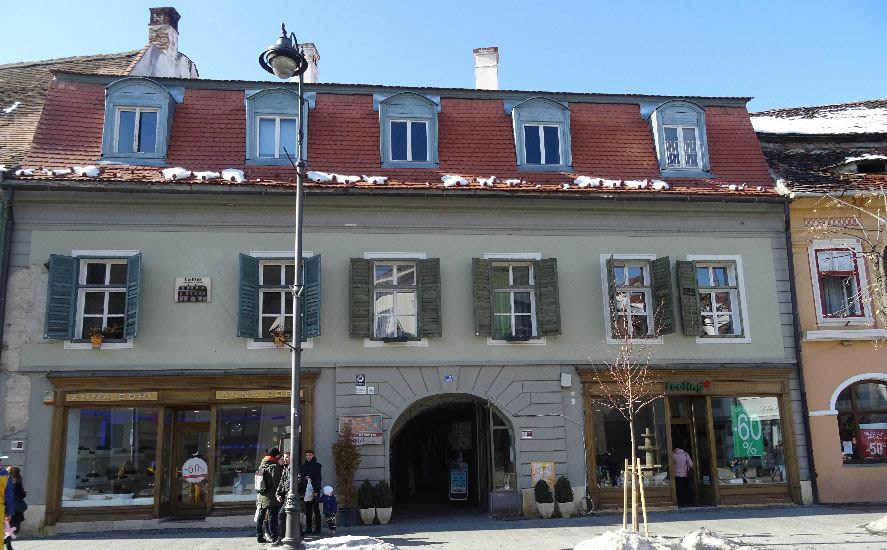 Representing the most important building of the street, the Michael Brukenthal Palace was erected in 1786 by the grandson of Samuel Brukenthal, county administrator of the German population between 1790 and 1813.
The posterior façade preserving all the original elements can be seen from the garden of this small palace, partially occupied by the building at no. 7, Xenopol Street.
The facade preserves traditional window joinery, with adjustable slats shutters;

- The coat of arms of Michael von Brukenthal and his second wife, Kristina, countess of Teleki, made in polychrome plastering can be seen on the wall opposing the entrance, at the first floor.
- The halls at the interior are richly ornamented with plaster images in relief.
-  The three rooms from the building  behind have a rich figurative ceiling stucco and the original joinery (1790)

After the death of the Brukenthal’s followers the house went into the property of Brukenthal Foundation from whom it was bought after the 1st World War by Vogelsang family. Gustav Vogelsang was the owner of the first knitting and weaving factory from Sibiu,  “M. Vogelsang”, opened in 1876, and on the ground floor of the building opened the factory outlet store. During the interwar period there was a ballroom in the upstairs building from the back. During the war here operated the German Officers Club and a cinema.