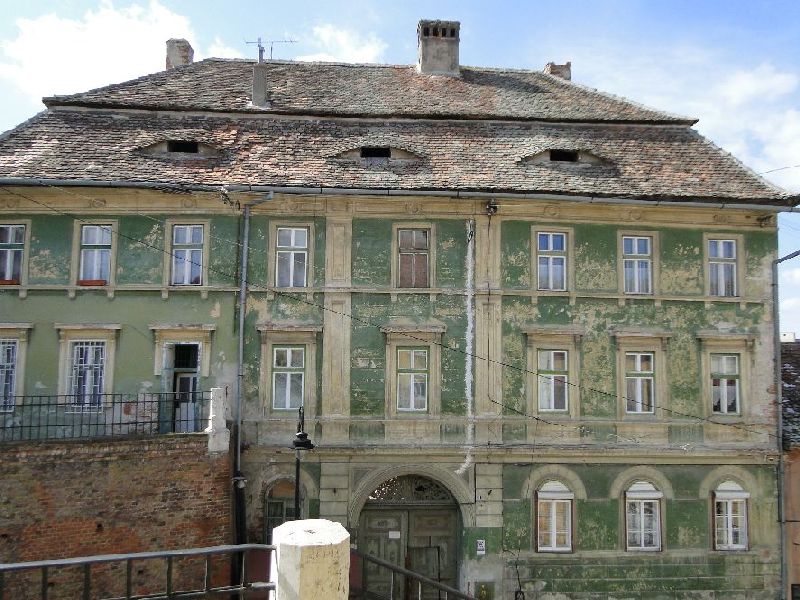 Building made up of basement, ground floor and two upper floors placed at the junction between the “Upper town” and the “Lower town”. Towards Ocnei, at the floor’s level, on eight axes. Downstairs, because of the slope and of the construction of the car access under "Podul minciunilor”/ „The liar’s bridge”, in 1860 appear five axes, three on the left situated at the basement’s level, and the next one being the gate’s semicircular corridor. The windows on the first floor have rectangular framing, straight cornice supported on volute consoles, window ledge, parapet decorated with decorative boxes.

The building was built at the end of the 18th century on the place of an older building. It was designed as an inn and the back wing was used for stalls.
The inn and the restaurant Zum Weissen Rössel (At the White Stallion’s), the diligence station, had also a transportation house. In December  1840, after two years of construction, “Coroana Ungariei” (Zur Ungarische Krone) in was opened. It had a coffee house and a casino on the last floor.
Jikeli’s pharmacy during 1848-1882 came from Piata Mica after the demolition of the houses from  Ocnei street. In 1882 it moved in Burggerg 2;
In the first decade of the 20th century, the building was used by the army  (12 Artillery Brigade) until the completion of the construction from  C Dumbravii.