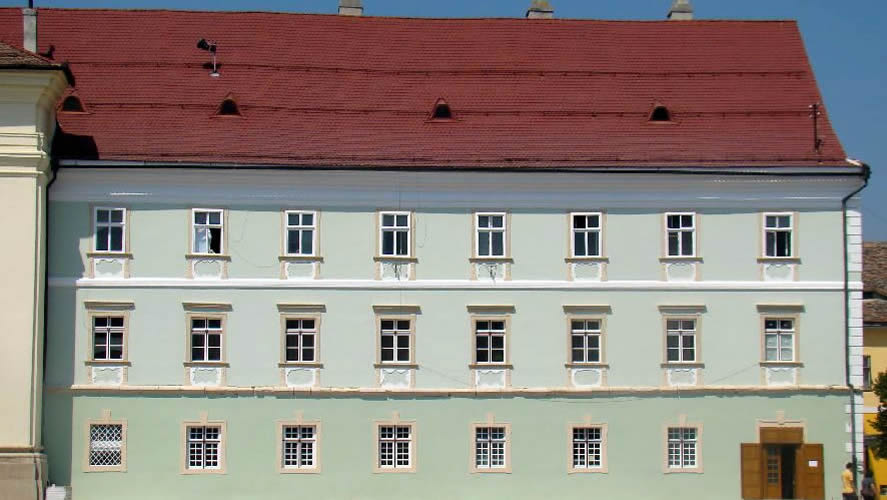 The former Jesuit Seminary, the present day Roman-Catholic Parish House (includes fragments of the Skinners’ Hall)
The building is formed of four bodies which correspond to the address at no. 3 in the Small Square.
Looking onto the Large Square, the main body incorporates a medieval area on the right hand side. It is formed of a ground floor and two stories, structured on eight lines.
The building has a two-ridged roof with a crest parallel to the façade and four semi-circular sheet metal skylights.
The rooms situated on the two floors are cross-arched or semi-cylindrical with penetrations. The entrance door framework bears the date it was built at - 1739. The medieval semi-cylindrical arches are still preserved at the ground floor and the first floor. At the second floor a Baroque arch with penetrations adorns the building.
The façade looking onto the Large Square has a length of 31.5 m.

The building hosted the house of the guild of tailors starting with 1466, built between the Small Square and the Large Square, on the location of the former swinger.
In 1688 the house of the guild of tailors was set up by the Jesuit monks for catholic services.
The elementary Catholic school functioned at the second floor between 1774 and 1790 and it was relocated in the building of the Ursuline in order to make room for the State Gymnasium which will unwind its activity here until 1899, when the present day building of the Gheorghe Lazar High School was inaugurated.
The county Court House (Bezirksgericht) was relocated here between 1899 and 1907.
Starting with the end of the 19th century, the ground floor hosted commercial spaces.
The first “information office for hotels, cafes and restaurants” in Sibiu, Fleck & Preis, opened on the left, and subsequently moved from here in 1907 in the space at no. 9 in the Small Square in order to make room for the Sibiu branch of the Commercial Bank of Pesta. After 1920, when this bank ceased to exist, its place was taken by the Siebenbürgischer Bank und Sparkassa until it was nationalized.
Friederich Czickeli’s blacksmith’s and household objects shop functioned on the right side starting with the end of the 19th century, having a second entrance from the Small Square. After World War I, Rudolph Habermann opened a store here (the first beer articles shop in Sibiu) and between 1926 and 1938 a kitchen articles shop was opened here by Mathias Schoger. In May 1938 the store of Rudolf Nussbächer, the representative of the IDEAL F. Schembro S.A. in Medias, opened here and will stay opened until the building was nationalized. It sold toys, children strollers, sewing machines and other household articles.