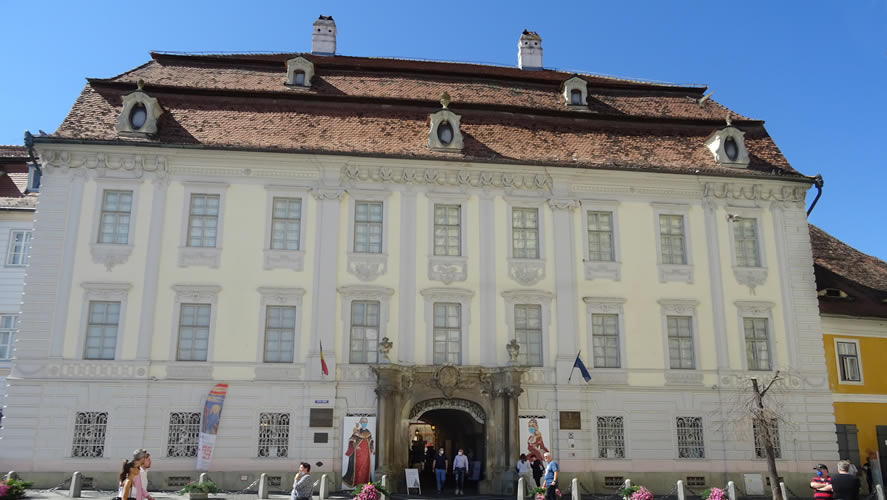 The construction comprises four wings that observe a quasi rectangular ground of 117m in length. The inner courtyard is divided in two by a transversal part of the building.
The main building presents basement, ground floor and two storeys. The access to the inner courtyard is through a central vaulted passage. The rooms at the ground floor present rib vaulted ceilings.
At the first floor there were the rooms for housing and the reception rooms. The art collections were displayed in the galleries organized in 13 rooms at the second floor.
The C part of the building initially presented only the basement and served for accommodating the stables. It comprises an ample room structured in compartments through the means of two rows of pillars. At the present, the space accommodates exhibitions.
The mansard steep roof presents five lucarnes of which three of oval shape and two rectangular ones, with triangular pediments, abundantly decorated. There are decorative urns placed above the pediments.
The building is harmoniously shaped, having a monumental appearance, displaying opulence and refinement through the means of its architectural elements.

- The main facade is abundant in decorative elements as Neoclassic or Baroque framework sculpted in stone, pilasters, floral and geometrical decorations.
- The portal’s framework in stone presents several decorations of which remarkable is Samuel von Blumenthal’s coat of arms and Baroque decorative elements as urns, rosettes and festoons.
- The entrance door is made from oak wood and decorated with symbols of the arts and the horn of plenty.
- The portal separating the front inner courtyard from the back inner courtyard was made by Simon Hoffmeyer and initially presented decorative urns; the telamons supporting it are still standing;
- The stone framework of the door at the left of the entrance passage was brought to the palace from the Teutsch House (Tipografilor Street No. 4), and was done by Thomas Lapicida in 1552.
- The stone framework of the door of the right wing of the building (towards library) was brought to the palace from one of the houses formally appertaining to Lutsch family (the coat of arms, ML monogram and year 1632).
- There are also two Baroque chimney.

Beginning in 1778, the building was erected as property of Samuel von Brukenthal, Governor of Transylvania (1777 – 1787). The palace is built on the pieces of land resulted from the demolition of two medieval houses, one inherited by governor’s wife from her family, one from senator von Offner.
The main building was complete at the end of year 1785 when the works for B and C parts begun, to be complete in 1788.
The palace was built in accordance with the plans of Viennese architect Joseph Franz Martinelli.

During the construction process, other masters or artists took part in, as is the case for:
- Simon Hoffmeyer - sculptor, the author of the main portal (according to the contract of August 10, 1779); it is possible that he is also the author of the second portal as well as of the facade decorations and inner decorative elements: stoves, chandeliers, supraporte etc.
- Anton Hertzum - stonemason, is the author of windows’ framework and columne capitals in the inner courtyards;
- Ludwig Christian Hezel – carpenter from Franconia;
- Johann Bauernfeind, joiner from Vienna, is the author of art joinery elements for the furniture but also of ceiling stucco;
- Nicolaus Jaffer – tapestry maker from Eisenstadt and Johann Tauffer from Vienna, produced the tapestry for furniture and possibly put the tapestry on the walls of the reception rooms;
- Franz Neuhauser jr. – painter is the author of some of the decorative painting and, perhaps, of the frescoes inspired by the Hercules legends;
- Johann Krempels – painter, decorated many rooms of the palace;
- Franz Burger - carpenter, was the one who ridge the roof;
- Bleicher Stove workshop (Bleichern, Blauher) in Vienna has made the faience stoves.

Festive Hall on the first floor hosted numerous social events. On June 6, 1783, one of these events was attended by Emperor Joseph II in visit to Sibiu. In March 1789, the newly founded Literary Society has been established in the back courtyard of the Palace; in 1790, the library was located in the transversal building unit and it was formed from a reading room, 2 rooms and 2 cabinets; it comprised 13,000 volumes. After the demolition of St. James Chapel in 1898, the Chapel Library (Kapellenbibliothek) which included the Dominican monastery library, the library of the gymnasium (founded in 1544) and some libraries appertaining to Sibiu’s patricians were integrated in the Brukenthal Library.
The library of the Society of Sciences of Nature also functioned here until 1895 when it moved to new quarters on Cetăţii Str.
On February 17, 1817, Brukenthal Museum has been inaugurated and the art collections of Baron Samuel von Brukenthal become public.
In the back side of the palace functioned, since 1853, Evangelical elementary school for girls (Elementarschule (Mädchen) ev. A. B.) with access from Xenopol Street.
In 1937 the body on the right of the back courtyard has been added an upper floor. In November 1943 – June 1944 the Palace cellars were arranged as anti-aircraft shelter.
The ground floor was used for commercial areas since the end of the 19th century.
So, on the left side of the entrance functioned between late 19th century and up to the First World War the Georg Mayer Bookshop, followed by 'Ostdeutsche Verlags und Druckerei A.G.' publishing and printing company that printed, among others, newspapers as Sieb.-Deutschen Tagespost and Wahrheit. In October 1920, here were printed socialist manifests inciting people of Sibiu to general strikes, which is why the printing press was shut down.
On June 1, 1930, Babos Bela moved in this space his musical instruments shop. The store will work here until 1949.
On the right side of the main entrance there were several shops of fashion and shoes in the 19th century, which functioned until 1899 when the space will be occupied by the Pharmacy of Carl Müller 'Zum schwartzen Adler' which moved in from buildings across the street that were to be demolished to make way for Credit Bank. The Pharmacy was the oldest in town, established in 1494. The former pharmacy of the city was bought by Georg Vette in 1704, when receiving the name of 'The Black Eagle'.
In 1790, the pharmacy is owned by Müller family. After Carl Müller Sen. the pharmacy was passed in 1904 to Carl Miller Jr. until 1914, and between 1914-1949 Eric (Erich) Müller; Eric is the one who established in 1915 a homeopathic pharmacy section. In 1949 the pharmacy is nationalized and closed down. In the same year all commercial spaces were closed and the facade received today’s appearance.