No.5 Large Square, The Blue House 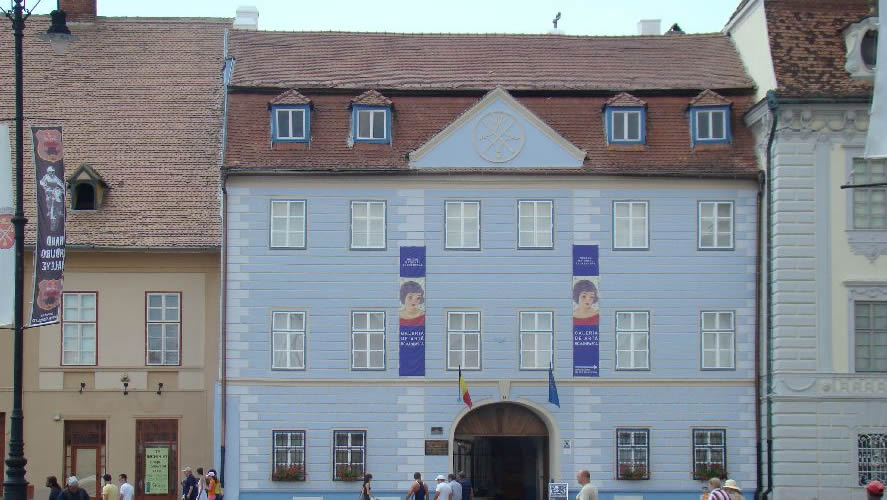 The building consists of five bodies which covered originally the entire parcel up to Xenopol Street. The main facade has a late Baroque conformation. It is organized on the height of two floors (6 axes) with a main arched portal placed under the two central windows flanked by two rectangular windows. The entire facade is profiled by horizontal bossages, while in the upper part, above the cornice, there is a triangular attic decorated with the coat of arms of Sibiu inscribed in a circle (dated ' 70s and ' 80s of 20th century).
The steeped mansard roof presents two dormer-windows at each sides of the attic. The access to the courtyard is done through a cross-vaulted passage, composed of three-span separated by arches.
Seven in total, the accommodation on both sides are endowed with semi-cylindrical vaults with penetrations and crossed structure, dated in the 17th c. The second floor was erected in 1819

After 1672, the house belonged to the pharmacist Georg Vette (from Gdansk) from which it was purchased by Baron Lambert von Möringer in 1734.  In 1767, Baron von Möringer changed the building’s structure in order to accommodate theatre representations between 1769 and 1783. The access was made from the Xenopol Street through a breakthrough opened in 1769.
In 1772, the Italian impresario Livio Campbell established here together with his ensemble. In 1773, the house was transformed in a Baroque style as shown by a drawing from the National Archives in Sibiu. The Magistrate of the city purchased the House in 1810 from the Möringer family for the amount of 30.000 guilders. The name of „Blue House” dates back to 1819 when the second floor was built and the building received the present appearance. The triangular attic with the coat of arms of Sibiu was removed in the ’50 of the 19th century and remake in the ’60 of the 20th century.
In 1844, the building sheltered the Academy of Law and between 1858 and 1862 it was the quarters of the Society of Natural Sciences. In the late 19th c. the building hosted the service for measures and weights (Marktamt städt) which moved in 1899 on the Mitropoliei Street No. 2. The Blue House is the address where Emil Sigerus and Mayor Wilhelm von Hochmeister (d. 1897) lived. It was also the quarters of Sebastian Hann Society founded by Emil Sigerus in 1905 and suppress in 1946.
In the interwar period, in the building bodies behind the court functioned a boarding school for girls and during the Second World War it was the quarters of the German Gestapo. In the Communist period the building sheltered the County Office of the National Cultural Heritage and Heritage Restoration Laboratories.
Currently, it houses the Romanian Art Gallery (on the 2nd floor access from Brukenthal Palace), a temporary exhibition room (1st floor) and areas of activity of the Brukenthal Museum (restoration laboratories, administration offices).

On the left side of the ground floor there was opened between 1704 and 1734 Vette's pharmacy 'The Black Eagle'. Also on the left side, Joseph Anton Popp opened on 5 December 1840 a textile and fashion store called Duke of Reichstadt 'Herzog von Reichstadt' which moved here from the Lesser Square where functioned since 1833. Joseph Anton Popp was the son of a merchant in Dumbraveni who invested his inheritance in a great store of textiles (mostly brought from Vienna) together with tailor Stephan Szilaghy. The store opened on June 10, 1833 in the Blue House, being the most important shop of its kind in Sibiu and will function there until 1853.
The profile of the store at this address will be continued by Johann Hamrodi who opened a fashion house until 1902 when at the place opens another store that became famous – a fashion house for men under the name of Otto Theil replaced, at his turn, in April 1935, by a clothing store for women called MANUFACTUR and opened by Arthur Wilk. During the Second World War is the Ion Sandru confections store that will remain to be opened here until the nationalization.

On the right side of the building, the first commercial space will open only in 1902 and it is grocery store of Josef Keil. His son, Johann Keil will turn it into January 1922 into a beverage shop and colonial; in April 1929, Raspop brothers (originally from Rasinari) opened here the Raspop Restaurant (representation of Luther brewery) that will function until the nationalization in 1948.