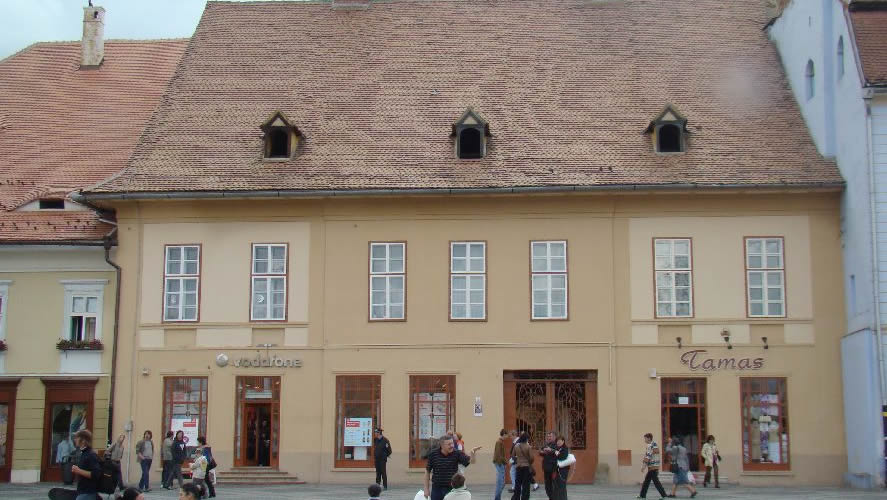 The house is formed of four wings, the main wing being that looking onto the square, with a rectangular plan and formed of a basement, a ground floor and the first floor. The façade is organized on seven lines at the first floor. The access towards the courtyard is situated on the right hand side.
The roof has two ridges and three skylights over a triangular gable with a small two-ridged roof. The basement level presents semi-cylindrical arches, originating from a construction dating from the 15th century, the stepped gable being visible from the house attic.
The initial aspect of the house results from a drawing dating from 1703: the ground floor and first floor, the eight lines of the structure, the central gate.

The house belonged to city administrator Valentin Frank von Frankestein, illustrious Humanist of the 17th century.
In 1840 a clothing and perfumes store was opened by J. Franz Zöhrer, who also became the representative of the Assicuratione Generali in Trieste insurance company in 1843, the first insurance company in Sibiu.
In 1884 the building served as offices for the the General Savings House in Sibiu (Hermannstadter Allgemaine Sparkasse) which moved here from Timotei Popovici Street. The bank was founded in 1841.
Hugo Lüdecke’s jewelry story was opened on the right hand side of the passageway at the end of the 19th century. Frenz Berthold’s café was hosted in the left wing of the building at the end of the 19th century. In 1895 the café moved on Balcescu Street, the location being taken over by Boda’s café and subsequently, in the period between the two world wars, Oskar Seiser’s coffee house opened here.
At the beginning of the 20th century, the Lawyers’ Bar Association unwound its activity at this address and during World War II this building hosted the Police Headquarters.
After the liquidation of Sparkasse Bank in 1948, the building served as offices for the National Cooperative Businesses Union, and the ground floor hosted the Romanian Savings Bank and subsequently Perla pastry shop (which opened at the end of the ‘70s)