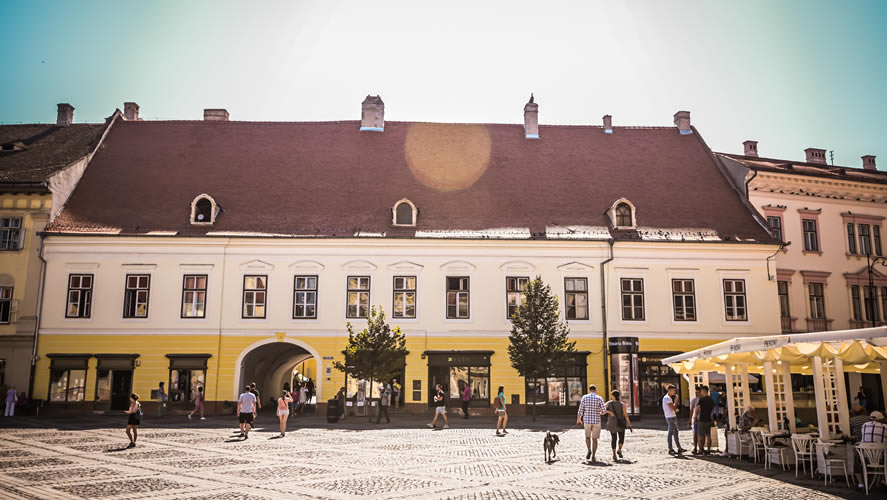 The main body was formed by uniting two houses separated by the passageway towards Arhivelor Street. The façade presents the actual aspect dating from the beginning of the 20th century.
At the present, the building has a ground floor and the first floor, its façade being organized on thirteen lines at the first floor.
The windows at the first floor are rectangular, with superposed straight cornices alternating with triangular or circular fragment brows. The double ridged roof with a crest parallel with the façade, displays three high stone rectangular skylights, decorated on their rims with volutes and covered with a small two-ridged roof above the triangular pediment. An identical skylight is also present on the wing looking onto Arhivelor Street, above the passageway. Access in the courtyard and from there to the first floor of the body on the right is possible from no. 2, Arhivelor Street, and access to the first floor of the body on the left is possible from the house at no. 1, Arhivelor Street. The main building preserves the cellar with a semi-cylindrical arch dating from the 15th century. The courtyard formed by the body on the right and the houses on Arhivelor Street displays a gallery supported by wooden poles.

During the second half of the 15th century, around the year 1475, the house (both the body on the right and that on the left) was owned by Paul Remser, alias Horwath, a land owner at Micasasa and twice mayor of Sibiu.
In the first half of the 16th century, the property on the right passed in the possession of Albert Huet (1537-1607), royal judge, and subsequently, in the period between the 17th and the 18th century, the house belonged to the patrician families of Gotzmeister Sifft, Fleischer and Baussnern.
Around the year 1590 the house on the left was owned by mayor Martin Weiss, and in 1598 the city purchased it and separates a narrow strip from it, creating here a passageway towards Pajistii Square.
This passageway was widened in 1784, when the two buildings were set up as the headquarters of the military commander, receiving their present day form. Since that time the house bears the name of “Generalloch” (The General’s hole)
In 1779 the building was purchased by the Magistracy and between 1784 and 1904 the General Commander of the Austrian troops in Transylvania had his headquarters here.
For this reason the house bears the name of the House of Generals.
The passageway on the right was transformed in commercial spaces at the beginning of the 20th century when the façade received its present day aspect.

The first commercial spaces appeared at the end of the 19th century.
The Carpatina in Ardeal society (the S.K.V.) opened the first office for tourism (Fremdenverkehrskanzlei) in the left wing of the house, on June 9th, 1902. A tram ticket sales office (Eisenbahn – Fahrkartenbureau) was opened here in 1905.
The Julius Zintz men fashion wear opened here in 1904 and functioned here until 20's when it was taken over by Kellner & Teutsch (former Julius Zintz), remaining in their property until World War II.
A clothing store owned by G.W. Graeff opened in October 1935 in the space left of the passageway. This space subsequently passed in the possession of Wilhelm Scherg & Cie (in April 1940) and starting with 1945 it hosted Victoria Textiles.
In 1910, Krafft’s printing house opened a presentation store in a space on the right hand side which will remain opened until the ’20s.
The space on the right, at the corner of N. Balcescu Street, was taken over in 1904 by Hugo Lüdecke, who moved his jewelry store here from the house at no. 6. The presentation store for the J. Theil & Co cold meats factory opened here on December 15th, 1934.