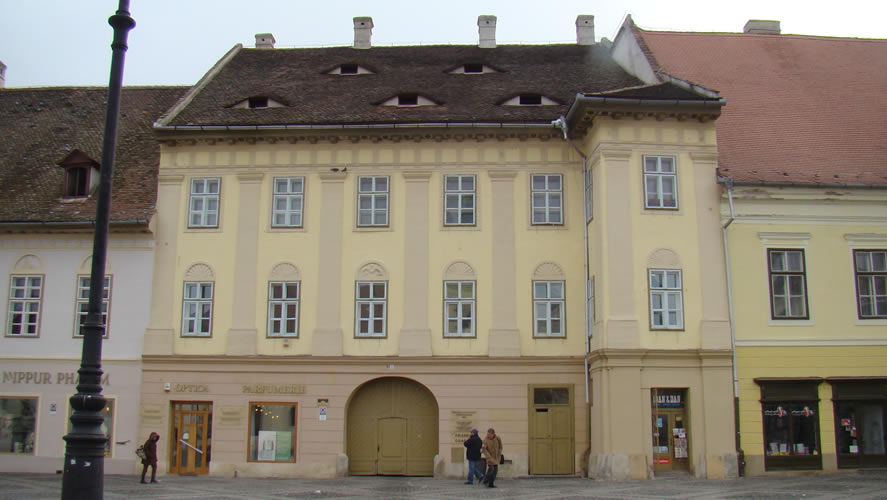 The building is composed of a ground floor and is two stories high, presenting an asymmetric concept of construction with a strong jutty, the entrance in the courtyard being possible through the withdrawn part of the building, through a passageway covered with a cylindrical arch with cross-like penetrations, 20 meters in length.
The building displays six lines divided by pilasters with pedestals and Doric column heads. The classic accents façade is probably dating from 1821.
The abrupt, two-ridged roof, with a crest parallel to the façade displays five eye-shaped skylights disposed on layers.
At the inside, the ground floor is covered with cylindrical arches and arches with penetration. The first floor hosts a single room, beautifully arched, with a cylindrical arch with star shaped penetrations and profiled rims.
Body C was erected at the beginning of the 20th century, its façade looking onto Arhivelor Street, connecting the buildings at no. 1 and no. 3: it has the shape of an eight arches portico, once opened but closed today, their interior being transformed in dwellings.

- The façade is decorated with deformed pilasters disposed on two levels, which sustain an entablement with a frieze decorated with metopes an triglyphs; the windows at the first floor  display a semi-circular glass decorated with circle segments embossed motifs;
- Renaissance style framework embedded in the wall to the left of the passageway; a name plate is fixed in the center of the entablement and during the period between the two world wars the coat of arms of Johann Waida, the mayor of Sibiu (who passed away in 1599) could still be seen
- Wooden flagged floor in the passageway;
- Gothic door with crossed baguettes at the first floor;
- The ceiling of the stair case is decorated with panels displaying decorated profiles;
- The entrance on the right of the courtyard presents an entablement with floral decorations on both sides of the entrance and a reinforced glass dome over the entrance (characteristic for the 19th century).

The first attested owner of the house, in 1450, was Cristophorus Italicus of Florence who, together with Nicolaus de Wagio and mayor Oswald Wenzel, administrated the Mountain and Monetary Chamber in Sibiu. In 1472, his son, Paulus Italicus, sold the house with 1000 gouldens to future mayor Georg Hecht. The house will be owned by the Hecht family for the next 100 years.  Around the year 1595 the house passed in the possession of mayor Johann Waida and remains in the possession of the Waida family until 1821, when the “Saxon University” purchases it at a price of 20000 ft.
District engineer Andreas Adam elaborated the designs for the adjustment of the house to serve as the offices of the autonomous Saxon territory, named “The Saxon University”. The ground floor and the second floor were reserved for the administrative offices, the first floor representing the accommodations for the Saxon city administrator.
The first document regarding a security printing office existing at this address appears in 1456.
This house hosted the first religious services in the spirit of Luther’s reform, the initiator of this movement in Sibiu being Georg’s son, Johann Hecht.
The offices of the Red Cross (Verein vom Roten Kreutz) functioned here at the end of the 19th century.

In 1855 J.F. Schneider opens his porcelain and dry goods store at the ground floor, this space extending also in the ground floor of the house at no. 9. Schneider’s successor will be Johann Weindel, until the house was nationalized.
During the communist period, the space was used by the Folkloric Art store.