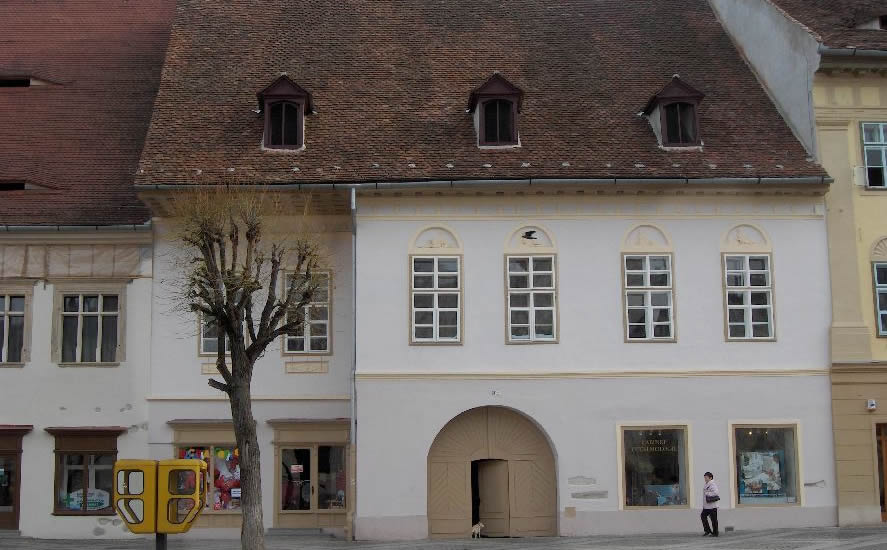 15th century with modifications executed in the 19th century

The house has a basement, a ground floor and the first floor, the front of the house looking onto the square being slightly withdrawn. The main façade is structured on six lines and has a classic shape.
The access in the courtyard is made through a passageway covered by a cylindrical arch. The staircase leading towards the street is decorated with a tall housing set in a circular arch which probably represented the base of a statue.
The part of the building looking onto the courtyard has a wooden balcony with a metallic handrail all around the first floor.
The building has a two-ridged, abrupt roof, with a crest parallel to the facade, displaying three tall rectangular skylights with a triangular pediment. Arching elements: in body B, 16 rooms at the ground floor display penetration arches, cross-shaped or semi-cylindrical arches and four rooms at the first floor display ceilings with moldings. The roof of transversal body B has a loft. In the courtyard there is a passageway supported by wooden poles (body A and B),

- The façade presents semi-circular skylights with mould floral decorations as well as a bas relief above the windows which represents human figures from the Roman mythology made of molding. The rain shadow intrados is decorated with embossed wooden rosettes.

Mayor Oswald Wenzel in 1456 and goldsmith Nikolaus Russe in 1468 were the first known owners of the house.
Between 1500 and 1600 the house was in the possession senator and merchant Johann Rappolt and his descendants. Around the year 1600 patrician Armbruster purchased the house and subsequently, Simonis, Lutsch, Czekelius von Rosenfeld owned it between 1706 and1754, followed by Michael Hirling.
Between 1795 and 1820 the house belonged to Andreas Wolff and Georg Gross. In 1828 mayor Martin Von Hochmeister, the famous pressman of the city, bought the house at a price of 3500 fl. He rebuilt it entirely. In 1866 the Saxon University came into possession of the house and preserved it until 1937.
Paul Friedrich’s pharmacy named “La Leu” opened here in 1780. After his death in 1795, the pharmacy was taken over by Andreas Wolff and Georg Gross. Between 1820 and 1836 the pharmacy was in the possession of the Sigerus family, from whom it was purchased by August Teutsch on October 22nd, 1836.
In 1884 Teutsch relocated the pharmacy in the house next door, at no. 10, the space serving until its nationalization as a clothing and manufacturing store, under various names and having various owners: Adolf Scholze (who had a cloth factory in the Dumbrava Forest), M. Krassowsky, Karl Kremer, G. Jacobi and Michael Ferengel.

Theodor Glatz moved in this building in 1870 the first photographic studio in Sibiu in the courtyard, opened in 1853. After his death in 1871, the studio is taken over by Kamille Asboth from whom it was purchased in 1898 by Emil Fischer. Three years later, Fischer moved the studio at no. 1-3, on Balcescu Street.
Several insurance companies functioned here until World War I and for a short time after World War II, it served as the Quaestorship of the Municipal Police.