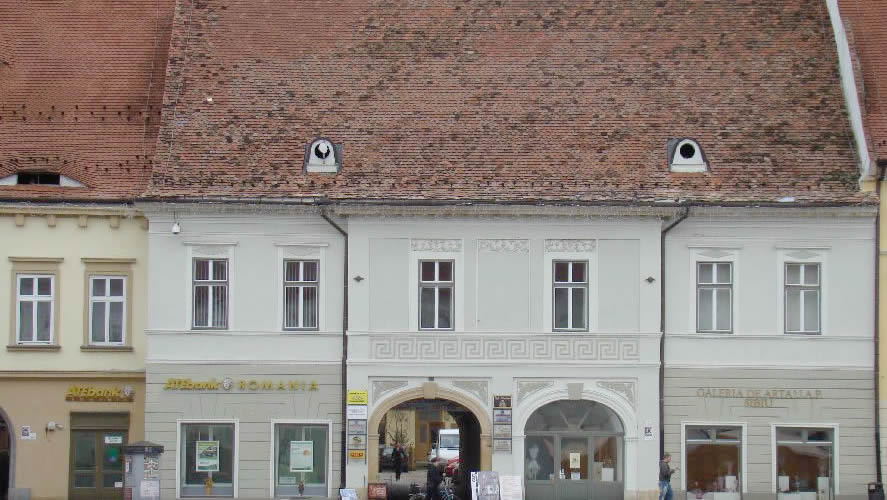 15th,  the beginning of the 19th century

The house is formed of five bodies, the main body having a basement, a ground floor and the first floor.
The façade looking onto the square has six lines, the central part forming a slightly pronounced jutty. Two twin arcades are present here, one serving as access to the courtyard. The gate passageway has a stone framework, the other arcade being a replica of the prior structure. The building has a two-ridged roof, with a crest parallel to the façade. It displays two semi-circular plate sheet skylights (with a round glass).

- The façade presents a meander frieze made of molding which separates the two levels and the framework of the super-posed windows presenting floral and vegetal motifs.
- The course in the courtyard is shaped like a loggia and marked by Doric columns (19th century)

Around 1475, the house was in the property of senator Velten Lederer. In 1584 it was owned by Christian Stolz and in 1620 mayor Paul Ludovici held the property of this house. His daughters passed the property to Stern and Johannes Hirscher. In 1695 it was purchased by Johann Bakosh, subsequently entering in the possession of patrician Johann Kissling, remaining in this family for 100 years.
By marriage, the house was inherited by Johann Andreas von Heidendosff and Karl von Wayda. Around 1850 it entered in the possession of Franz Josef von Salmen, a Saxon city manager. Salmen’s descendents sold the house to the Land Credit Bank in Sibiu (Bodenkreditanstalt) at the end of the 19th century.
The Agrarian Association of Saxons in Ardeal (Landwirtschaftsvereins siebenb.-sächs.) had its offices here at the beginning of the 20th century and until World War I, having moved here from a space on Avram Iancu Street. Several other insurance companies (such as BIOS, Germania, etc) also had their offices in this building.
The Karl Graef book store and stationery functioned in the space to the left of the passageway from the beginning of the 20th century and until the house was nationalized.
In a space to the right of the passageway, another famous firm in Sibiu, namely the Gustav Dürr sewing machines and velocipedes store, opened here at the end of the 19th century and stayed open until World War I. In 1937 it was the representative of Triumph.
Karl Hollinek’s clothing store was hosted by the next space looking onto the street, opened at the end of the 19th century and until World War I, followed by the cloth warehouse of the Gromen & Herbert factory. After 1928 Hans Schuster’s cloth store opened here and will function in this space until it was nationalized.