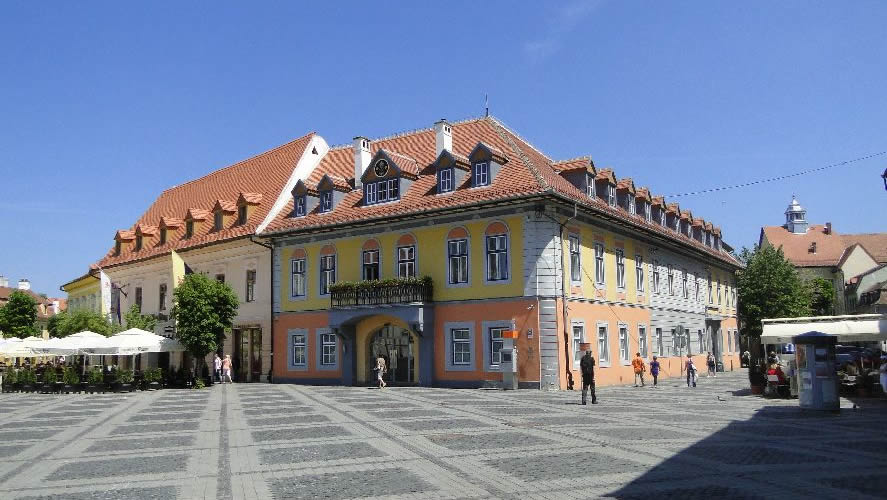 The building has a rectangular plan and is formed of a basement, a ground floor and the first floor, with two facades, one looking onto the Large Square and the other looking onto G-ral. Magheru Street, communicating with the house situated at no. 1 on this street. The façade looking onto the Large Square is structured on six lines at the first floor.
The large rectangular windows from the first floor have semicircular skylights on top, decorated with embossed circle sectors motifs. The two central windows (one transformed in a door) open towards a balcony with an arched base, closed by a wrought iron grid, sustained by doubled consoles, placed on both sides of the central access. The two-ridged roof has a crest parallel with the façade and two eye-shaped skylights. The façade looking onto Magheru Street is connected to that of the house at no. 1 and is structured on 12 lines. The access at the first floor of the building is possible through the house at no. 1 (on Magheru Street).

Franz Neuhauser Jr.’s painting (around 1790) presents a building with a tower hosting accommodations on four levels, two jutty building bodies, Renaissance style windows, Gothic fleurons and tiles on the roof.
Prior to 1424, the offices of the prepositure were present in the nowadays building and after this date, the building found at this address hosted high officials visiting Sibiu.
A chapel was found in the courtyard (The Chapel of Saint Ladislau according to Al. Avram – A guide to the city - Sibiu, “Sport – Turism” Printing House, 1983, page 81). Only parts of the foundation remained of the old building and chapel.
At the end of the 15th century the house was owned by the Altemberger family and subsequently, between 1537 and 1593, it was in the possession of the Haller family. It then belonged to Johann Lutsch.
In 1661 Georg Reussner becomes the owner, its decendants donating the building to the city in 1821. The radical transformations took place in 1830, the building receiving then its present day aspect.
At the middle of the 19th century Lem Heinrich Thierry’ book store (Kunst und Buchanlandung) opened here, which he inherited from Wilhelm v. Thierry. It was from this book store that János Bolyai ordered his mathematic manuals, Sibiu being at that time the only city where one might purchase such books. Lem Heinrich Thierry lived on Filarmonicii Street.

At the end of the 19th century the space hosts a haberdasher’s store and subsequently the presentation store of the toy factory until 1898, when Ludwig Fuchs’s grocery store opened. The grocery store was transformed in a delicacies store by Fuch’s son, after World War I.
In October 1937 a pharmacy owned by M. Jantea and called “The healing spring” opened here and starting with 1948 the ground floor was transformed in a pub and beerhouse first called “Oltul”, and subsequently known as “Dunarea Restaurant”.
In 1999 the building was completely rehabilitated by the Democratic Forum of Germans in Romania.