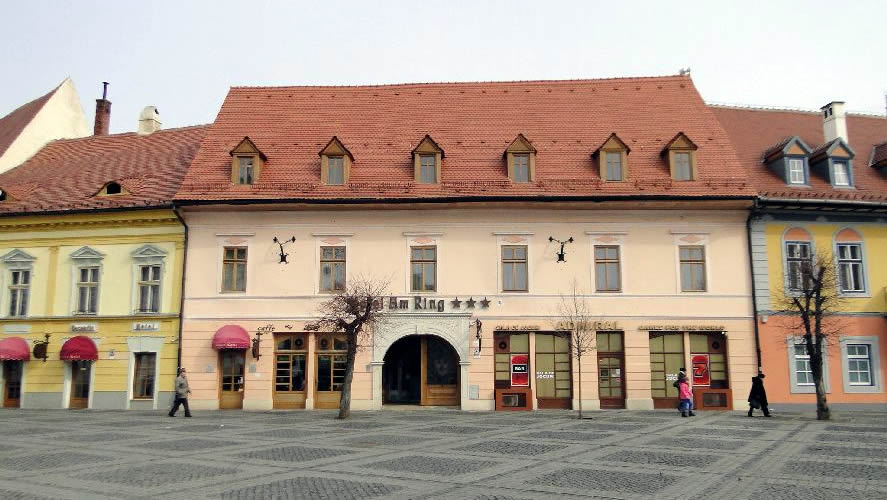 15th - 18th century with modifications executed in the 19th century

The house is composed of a basement, a ground floor and the first floor, the façade being structured on six lines at the first floor. Looking towards the house at no. 15 one may notice the pinion of the roof which still preserves its original trajectory on one side, but also a very narrow window shaped like a traverse. The two-ridged roof has a crest parallel to the façade and displays four wooden skylights, tall and rectangular, with a triangular pediment.

- Arched cellar with a central pole (unique in Sibiu)
- Fragment from a Gothic console placed on the wall of the house situated at no. 13 (the 15th century)
- At the first floor, looking onto the courtyard, there are a series of rooms with molding ceilings

At the end of the 18th century the house had five lines at the ground floor, the gate being placed in an enclosure of the wall facing the house at no.13. The building displays Renaissance style windows, with stone frameworks. During the communist period the access passageway was obstructed and turned into a store.
In 1843 Paul Nendwich purchased the house and Johann Anton Popp’s store along with it and opened a store with technical articles in the left wing. In 1869 the first sewing machines in Sibiu will be sold in this store.
The space of the store stretched in the ground floor of the building at no. 15 as well, which was also owned by the Nendwich family.
At the beginning of the 20th century, after the death of Wilhelm Nendwich, the store is purchased by Karl F. Jickeli, who moved his electrical appliances department here.
In 1923 the space is used for the sales of the electrical products of the SETA Plants and subsequently it hosted the Motor-Lux store until the nationalization of the building. Motor-Lux was the representative of the Mercedes Benz factory in Sibiu.
Several cloth and fashion articles stores were opened in the spaces to the right of the passageway, such as G. Stenzel (until World War I), Hugo Wolff (until 1928 when it moved on N. Balcescu Street, at no. 16) and Josefine Demetter.
After the war, the building hosted the offices of the Construction Handy-Craft Cooperative.