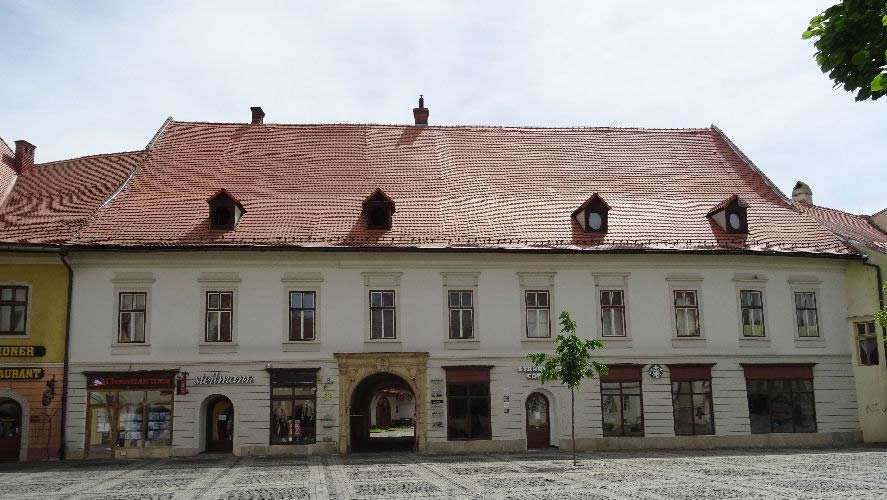 15th - 18th century, with modifications executed in the 20th century

The present day house, which in 1875 included two buildings with different numbers, is composed of seven bodies and has two inner rectangular shaped courtyards. The present day façade, now united, has 3+4+1+10 building lines at the first floor, the ground floor being entirely modified thorough the insertion of large windows serving to the stores opened here. The windows are rectangular with an adorned breast and an entablement at the superior part. To the right, looking onto the square, the building has an abrupt, two-ridged roof, with a crest parallel to the façade, with four high, rectangular skylights. The body on the left presents a three-ridged roof, with an abrupt declivity, displaying three skylights.

- The main gate repeats the motif present on the Haller house, but in the center it displays the crest of mayor Johann Reussner junior (+1654). The crest is accompanied by the year 1652 and by the monogram EN (Elias Nicolai)
- The door framework is made of sculpted stone. A name plate under the shape of a widened shield with a rounded point is placed in the center of the entablement, reading the cipher CW (Czirves - Servatius - Weidner junior) accompanied by the year 1582.
- Baroque ceilings with moldings in the rooms at the first floor

The right side, where the gate is placed, belonged to the Weidner family, and then to senator Johann Reussner junior, body D entering the property of the Czekelius family, in the last quarter of the 15th century.
In 1902, fragments of a fresco representing the Trojan war and dating from the end of the 16th century were discovered in the festive hall at the first floor (Al Avram – Touristic Guide of Sibiu, “Sport-turism” Printing House, 1983, page 82)
In 1865, J. B. Misselbacher opened at the ground floor one of the largest stores in the trading history of Sibiu.
On the occasion of the centenary, in 1918, Misselbacher donates 100000 crowns to the city for the support of those who suffered following the war and another 100000 crowns for the construction of a superior school for commerce.
The construction suffered essential modifications after the war, the ground floor being transformed in a line of stores which functioned under the name of the State Store in Sibiu.