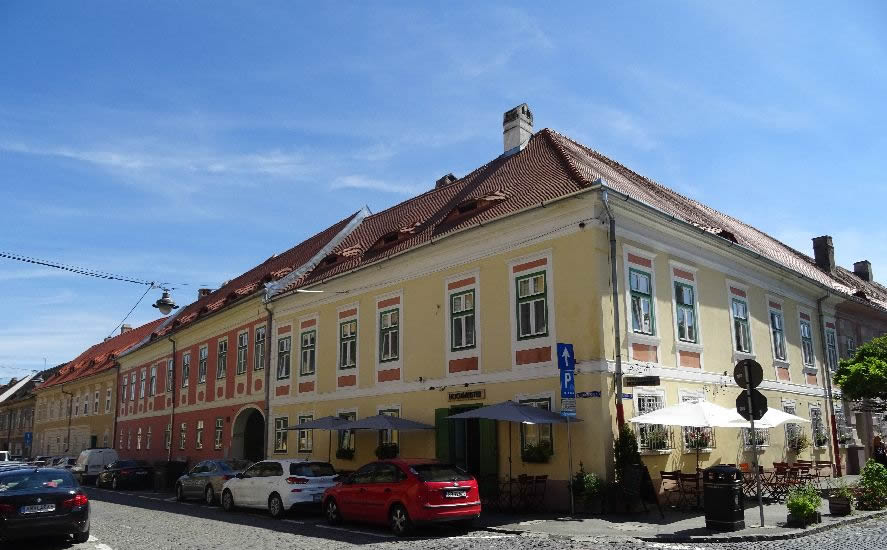 The building is formed of a basement, a ground floor and the first floor, resulting from the joining of two houses in the last third of the 18th century. The façade is organized on ten lines at the first floor and nine lines at the ground floor. The windows are decorated with a rectangular panel placed between the superior belt and the sill of each window. The ridged roof has a crest parallel to the façade with four eye-shaped skylights.

A stone plate is found at the left of the passageway. The inscription was set up by Martin Hochmeister in 1786, on the occasion of Emperor Joseph II’s visit in his printing house on July 17th:
“1786, July 17th, three quarters to seven, I had the great honor of receiving the visit of His Majesty, Joseph II, who visited the library, the printing house and the entire household and he was very pleased with everything he saw”

M. Hochmeister’s printing house functioned here since 1777. After the death of Hochmeister jr (1837) his descendants will sell the printing house, the book store and the library to Theodor Steinhausen.
The Honterus Buchdruckerei und Verlagsanstalt Printing House emerged in the period between the two World Wars
This building was the head office of the Lodge of Saint Andrew.