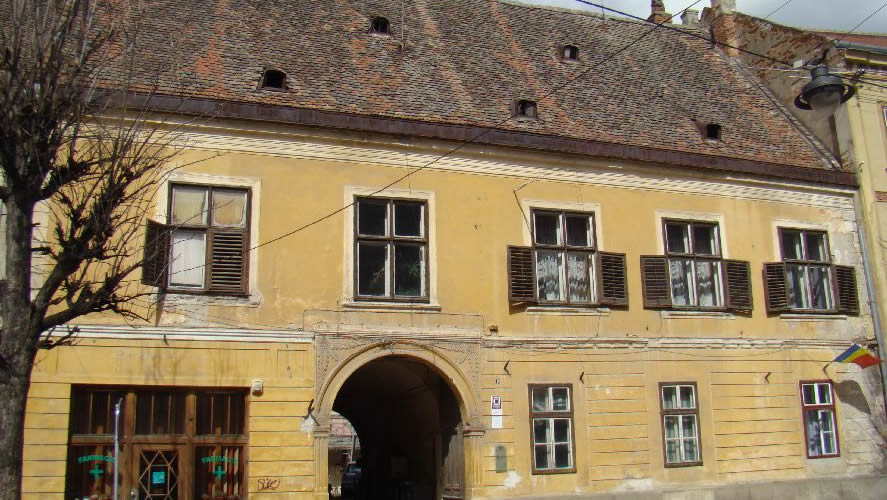 The Weidner House no. 9,

Four wings building that form a rectangular enclosure. the main building, made up of basement, ground floor and upper floor displays a five axes facade. The upstairs windows have traditional slats blinds. High ridged roof, with the ridge parallel to the facade. The semicircular cellars with penetrations belong to the building from the 15th century.

In the semi-cylindrical passage way engendering a series of penetrations there is a stone border with dentils, with a nametag dating from 1571 and the initials J. W., indicating the rehabilitation after the fire in 1570. The motto “VIEL WISSEN UND WENIG SAGEN/ NICHT ANTWORTEN AUF ALLE FRAGEN” could be read on the stone arch, painted in gothic letters.
The Renaissance stone portal,  with splinted pilasters which support a circular curve element  surmounted by a horizontal cornice, with vegetal decorations between the two elements;
The tower converted into the back yard building (14th century).

Known as the Weidner Residence, it has a column portal with rectangular fluted columns.
The future Hungarian architect KÓS KÁROLY, an important personality in the regeneration of the medieval language in the modern architecture, spent his childhood here between 1889 and 1893.
The Renaissance style arched courtyard preserves in the back the remains of an octagonal defense tower which was part of the third precinct.
According to some sources, here moved in 1851 the Law Academy from the “Small Square”
At the end of the 19th century, the house is bought by Ioan Badila, judge at the Court from Sibiu. After his death, the house is bought by the local councilor Ioan Moldovan and in the interwar period it appears under the property of  ASTRA Association.
Between 1896-1902 here was the office of the Electric Power Company Sibiu – UES (Hermannstaedter Elektrizitaetswerke AG)
The trading estates downstairs appeared in the 19th century.