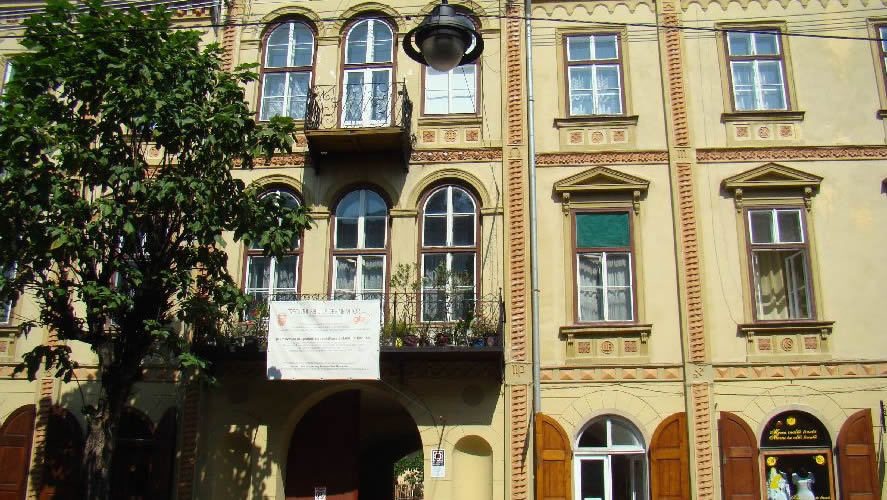 Building made up of the unification of several bodies. The richly decorated facade is symmetrical with the axis corridor. The ridged roof, with the ridge parallel to the facade has a ridged roof covered in the central axis. The cellars are semicircular vaulted and the ground floor is semicircular, crossed and a vella. To the courtyard, in the exterior staircase there is a wooden window frame, divided into four parts, with a denticle border (the Renaissance). The garden includes remains of the 3rd fortified enclosure.

Richly decorated facade with a series of monograms and zodiac signs with philosophical meanings, cordons decorated with geometrical elements, and also six vertical pilasters with spiral motifs made up of ceramic performs, numerous figurative elements (eight eagles, human and lion’s heads) under the cornice;
 The four side flowing of the courtyard, supported by wooden columns and the wrought-iron flowing, supported by cast iron brackets. On the first floor, above the corridor the is a pattern on the railing, with the letter M;
 The gate with two lions;
 The ground floor’s room painted with floral motifs;

The facade representing a series of monograms zodiac signs with philosophical meanings, made by the owner, Dr. Johann Müller, who was a philosophy and legal sciences Ph.D.
At the end of the 19th century- beginning of the 20th century, here was the office of numerous institutions: The County Court, The Bar Association and The Diaspora Headquarters from Sibiu. Numerous companies worked on the ground floor, since the 19th century, from bakeries to fashion and shoes shops.