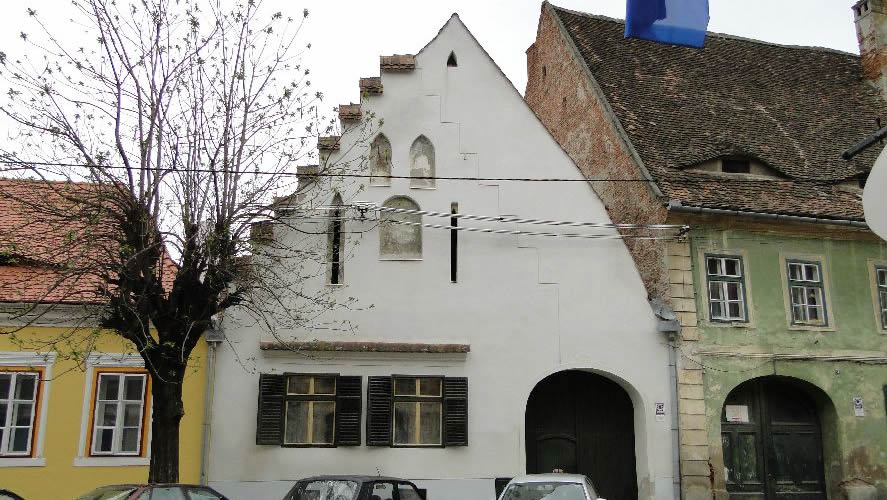 Basement and semi-basement building. The access to the courtyard is made through a narrow passage, entirely included in the gable’s facade. To the street, the building exhibits a Gothic gable with two windows at the ground floor’s level under a common cornice covered by tiles and the simple arch opening of the corridor.
Above the windows, at the attic’s level – there are three long openings (representative for church gables)

The Böbel House, dating from the 15th century, is considered to be the oldest dwelling in Sibiu. Its walls are made of stone and brick and the building has a stair-like pediment, with niches and small, prolonged windows, with the aspect of firing holes. Part of the pediments’ stairs were marked on the exterior plastering, during the most recent rehabilitation. The others were lost during a rehabilitation carried out during the 15th century.
Much like the rest of the rooms, the cellar, engendering numerous niches meant to deposit products, is arched with walls set in a semi-cylindrical manner. It was presumed to be a craftsman’s or a merchant’s house, the only known owner of the building during the 15th to the 19th century being Neugeborn, a goldsmith. The list of the known dwellers starts as late as around 1850, when the house was bought by the head of the bakers’ guild, Johann Böbel (1824-1887), who built a furnace in the courtyard. During the 1848 revolution, Timotei Cipariu, a personality of the Romanian culture, a deputy and member of the Directing Committee of the Revolution, pursued by the authorities, takes refuge in Sibiu, where he settles in a room at the first floor of the Böbel residence. In the same house belonging to Johann Böbel, Cipariu meets with some of the leaders of the revolution - Gheorghe Baritiu, Simion Barnutiu, August Treboniu Laurian, Axente Sever, Avram Iancu, Ion Maiorescu, Dionisie Romano, Nicolae Nifon Balasescu – together with which he plans the unwinding of the events. The house at no. 16 was bought in 1941 by Octavian L. Vestemean. Immediately after this acquisition, Vestemean moves here along with his entire family and decides to move here the printing house which he owned on Tribunei Street -”The Printing House and the First Postmark Factory in Romania”. He printed here from professional monographic works, literature books, poetry, local newspapers and magazines to religious books, local official bulletins, calendars and medical charts. The Vestemean House miraculously escapes from the nationalization due to the fact that the owner “donates” the printing house to the State in 1949. Octavian Vestemean does not part with books though, opening a bindery workshop, where he works as an entrepreneur until 1978, when he passed away. Nowadays, the oldest dwelling in Sibiu is inhabited by the daughter-in-law of the last owner bearing the name of Vestemean.
The house is not opened to the public.