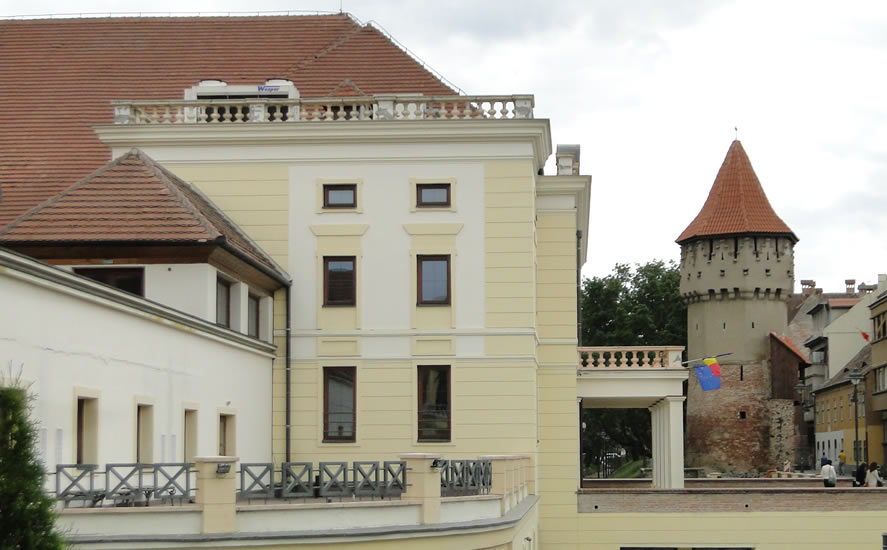 Thalia Hall was erected in 1787 by Martin Hochmeister, the founder of the first bookstore in Romania, the building representing a true architectural gem and at the same time a cultural edifice of national importance.

Unlike its nowadays main destination, that of serving music, initially the hall was conceived to host theatrical representations. Given that there was no appropriate space with such a destination in the city center, the city authorities decided to build the theatre house in the Thick Tower, part of the defense belt of the city. The Thick Tower is a massive construction on a semi-circular layout, with brick walls (with a stone base) and a platform were the towers were located. The Tower was built by Marcus Pempflinger around 1540.

The construction was erected during a year so that in June 1788 the first theatrical performance took place, the hall becoming the first theatre house in today Romania.
Over time, famous personalities of the Romanian cultural life among which George Enescu si Mihai Eminescu performed on this stage. Mihai Eminescu was a blower in a play performed in 1867 by Mihai Pascaly’s troupe which at that time was in an « artistic and national propaganda tour in Ardeal ».  It was for the first time when a play was performed in Romanian. The troupe did not pay any taxes for the hall due to the fact that they played in a series of free entrance performances for the poor inhabitants of the city. The newspapers of those times related that performances took place with a full house, some of them being attended by the city officials but also numerous spectators from the Romanian villages around Sibiu.

Over time, the building was devastated by two fires. The first one came about in 1826 and the damages were repaired by Martin Hochmeister jr. The second fire broke out in 1949 because of a cigarette which hadn’t been put out, the fire being stronger and causing the activity of the theatre to move in the building of the former Apollo cinema house where the Radu Stanca National Theatre functions today.

In 1990, the Sibiu County Council began the reconstruction of the hall which respected entirely the former architecture of the theatre, as it had been in its times of glory. The construction works were finalized in 2004, the inaugural concert having taken place in May of the same year.