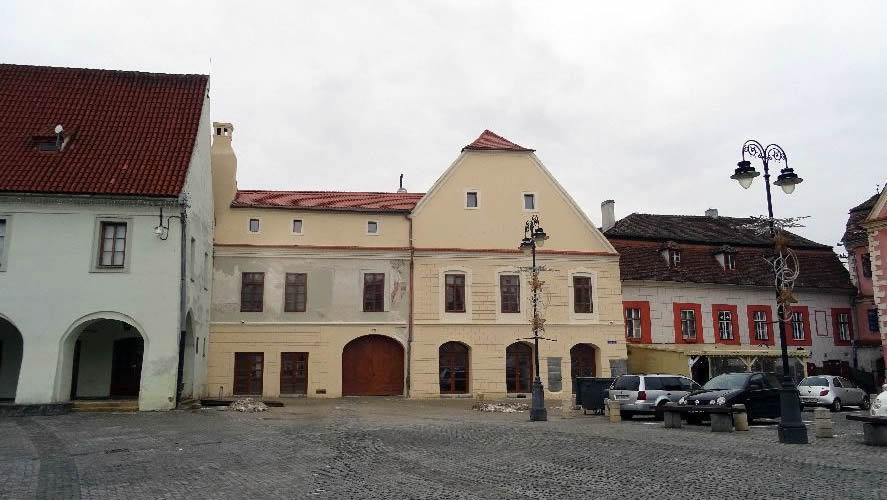 The building is made up of three parts , two of them are united and make one building. The transformed frontage on the ground level used to have an open loggia until the XIXth century. On the floor, the 6 traditional windows are divided in eight. The acces in the yard is made through a vaulted arched portal with stone sides. The cellars preserve remains of the first two fortified buildings. The one sided roofs towards the yard present traditional chimneys and rectangular dormer windows. The garden is transversally divided by a medieval wall which belonged to the building which used to have a gate with a stone staircase in the XVIIIth century. A second medieval wall delimitates the garden from the parcel in Ocnei Street nr. 10.

- The fresco hall from the right side, vaulted and having special and very precious mural paintings representing a judgment scene, a biblical image, an allegorical one and a hunting scene dating from 1631 and a coat of arms made of polychrome plaster work from 1694.
- The passage with the wooden staircase leading to the garden.

The building on nr. 22 is the only one presenting the same characteristics typical to the buildings in the Large Square with interior yard and vaulted entrance.
In April 1957 frescos were discovered on the right room in the ground level which at that time was used as a grocery store. It is an extremely important discovery as it is the oldest laic mural painting from the 17th century ever known in Transylvania. The coat of arms on the ceiling confirms the fact that it belonged to a high representative of the town (  possible  being Valentin(us) Frank von Frankenstein, the Hupt family, Johann Zabanius Sachs von Harteneck).
During the Revolution from 1848-1849 it was the head office of the major state of the Austrian army . In the XIXth century the house belonged to dr. Josef Rohm and it was later bought by Franz A. Reissenberger . After his death it remained into Ludwig Reissenberger’s property (1881-1964).

At the end of the 19th century we find the house  articles shop , later on run by Joseph Scherbaum  until the nationalization. On the left side, after the First World War  B. Hollander’s  paint shop “ La Elefant” opened. In 1930 Ionita Oltean opened in 1930 a large shop of special sweets. During the communist time  there was a grocery’s shop and a shoemakers’ shop. In the beginning of the 90s the building housed a special command shoemaker’s shop, a siphon’s shop, the  “ Evenimentul Sibian” ‘s editorial board and the antique shop “ Fresca”.
It has been restaurated in 2009 and opened to the public in 2009.