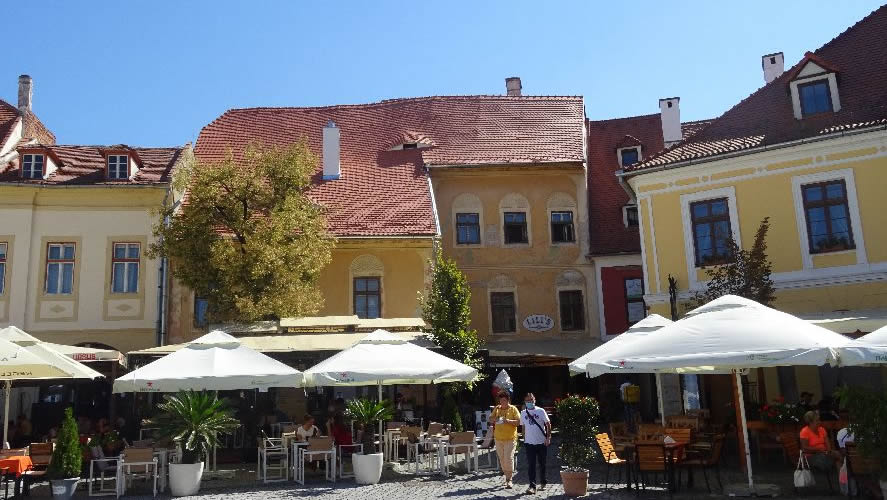 The trapezoidal building with basement, ground level and two levels and a jutty towards the square has the frontage structured on three axis in each of the two component segments. The right side was added another store at the end of the 18th century. The building presents both on the inside and on the outside elements of Gothic architecture.
The two sided roof with a ridge parallel with the frontage and very high on the left part has eye dormer windows and baroque chimneys. The cellars are cylindrical vaulted and the ground level is cross-shaped. In the yard fragments from the second fortification wall can be noticed.

- In the floor hall, cross vaulted , mural painting was discovered during the restaurations in 2010
- The opened loggia in the ground level with the two ogival openings
- The frontage with ancadraments with semicircular groins and a radial decoration on the top of the windows

Franz John opened  in 1842, on the left part the Franz Jahn &Comp. He was the building owner. After his death his two sons Julius and Gustav are the owners. On the right side, by the gangway, Karl Kremer’s butcher’s functioned until 1880 when Nicolaus Nadasdi, original from Caransebes  opened a manufactures’ shop  which is run until the interwar period. Around 1908, Jahn’s two sons, Gustav and Julius open each of them one shop in a different location selling the house to Dumitru Popovici, Nadasdi’s son-in-law.