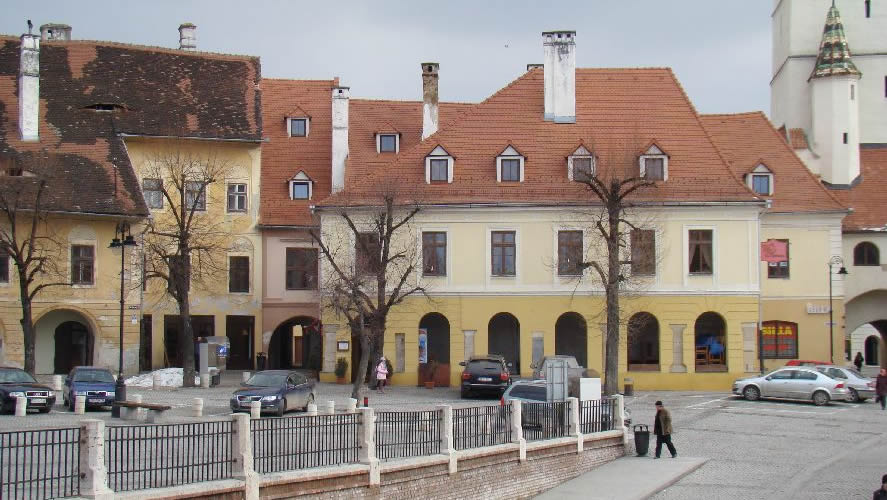 The building is made up of basement, ground level and level , in a rectangular plan with 2  lateral jutties towards the square.   On the external part the ground level towards the square has  arched vaulted openings covered with metal. The windows on the floor have simple ancadraments.  From 1853 the tower has been modified and incorporated to the actual building  and the connection passage with the Avram Iancu Street was covered.   The tower presents a semicylindrical vaulted ground floor with a triangle penetration , a semi circle opening towards the square and a  high two sided roof with the ridge parallel with the frontage and a rectangular dormer window. The floor windows have profiled ancadraments incorporationg the parapets. The four sided roof with the ridge parallel with the long frontage has two sided dormer windows. The cellars are semicylindrical vaukted and the ground level has been radically transformed during the interwar period.

The first town hall of Sibiu functioned in the wing towards the square. In 1324 the building had already been existed and it functioned as a town hall until 1494, the basements being used as prison even after that period. The building of the old town hall was raised 12 m distance to the second defense wall and the  building linking the old construction represents a second building stage.
In 1853 the building over the Currier’s Passsage.

In the 18th century the house belonged to  the merchant Michael Rideli who run a shop in the ground floor. From 1848 Cral F. JIckeli’s  ironworks shop was run . After the war the shop was called “Ferometal”.