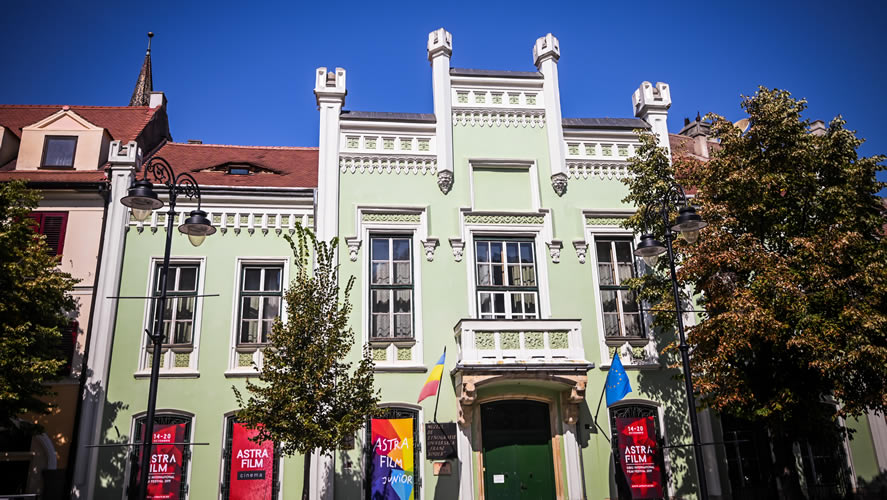 It is unfolded on a  simple trapezoidal plan, closing on three sides a small interior yard covered with glass.   The building is made up of basement, ground level and a level on the high of two levels. The main part of the plan is under the form of a jutty in both squares. The main entrance is almost centrally made through a passage covered with the vault covered in bays, through double archways supported by pillows. The neo-Gothic frontages are treated symmetrical towards both squares with a central jutty ended through a gable in stairs with small towers. The three bays are delimited by engaged pillows ending in similar towers. Both frontages are structured on 7 axes. The relatively plate roof has a complex shape due to the central lightning. The basement is vaulted, semicylindrically flattened with penetrations conserving some vestiges of the medieval house and of the wall of the first house. From the hall, a monumental staircase in two banisters, under the lightning is leading to the floor.

- The stone plaques in the hall, the one in the middle with the coat of arms of the former Saxon leader Johannes Lulay and the two lateral stones inscriptioned –the one on the left side indicating  ANNA MARIA FRANKLIN/GEBORENE /ROSENAURIN  and the one on the right side  VALENT(IN) FRANCK/JUDEX REGIUS/ANNO 1695/DIE 6 IUNII/(Ana Maria Rosenaur was Frank von Frankenstein’s second wife).
- The neo-gothic frontage with the central jutty ending through a gable in stairs with small towers and the balcony with railing in a neo-gothic style

At the end of the XVII century the house belonged to Valentin Frank von Frankenstein. After his death it became the property of Johan Zabanius Sachs von Harteneck who was beheaded in XXXX. Following his death the house was confiscated by the state until 1864 when the Saxon University bought it and a year later it was sold to the reunion of Citizens and Craftsmen ( Burger und Gewerbeverein). Until 1864 it functioned an inn with restaurant  “ La Cerbul de aur” ( Zum Golden Stern).
Initially called the “ House of the Association of Small Tradesmen”  ( Burger und Gewerbeverein Haus), it was built between 1865-1867 and inaugurated on the 24th November 1867 thus becoming administrative office of the association and a place where various activities took place –library, calf  education, exhibitions…etc.

Shops functioned in the ground level from the beginning , the first on the left side opened in 1867 was the book-shop, stationer’s, and library of Frank Michalis, until 1892 when it moved in the Balcescu Street and being followed by the musical instruments , toys and stationer’s shop owned by Ludwig Michaelis until 1901.
On the right side , it run since its inauguration the shop of cloths belonging to the Scheerer Company and later on Karl Scherer&Sohne  Company until the First Word War. It was followed by the clothes shop Gustav Jakobi, the representative of the Gromen& Herbert Factory, becoming Jacobi and Herbert in the interwar period.
During the interwar period in the Huet Square Carol Kovats’ Hall of Popular Beer was opened ( Volksbierhalle) until 1939 when it was moved to Balcescu Street. In its place the  Henric Hermes  restaurant was opened until 1943. And it was later on called the Hermes House.

Nowadays the building has been lodging the Franz Binder Museum of Universal Etnography since 1990.